What in the World was Pope Francis Thinking as He Prayed with an Imam Facing Mecca? 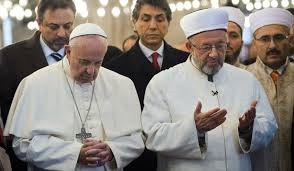 “The Bible tells us to pray for unbelievers, not to pray with them.”

Pope Francis recently travelled to Istanbul where he met the Grand Mufti of the Blue Mosque. While he was there Pope Francis took the occasion to pray together with this high ranking Imam. With his head bowed  standing next to the Mufti facing in the direction of Mecca this Pope made quite an unusual image for us to consider. This is not what you would expect from the leader of the Catholic Church and an official representative of Christianity.

It is a Muslim custom to pray facing the direction of Mecca. It is not a Christian custom. Neither are Mecca or Medina  holy cities to Christians. We don’t turn our heads or hearts toward Mecca while we pray. There are enough Muslims who can do that and the carnage they bring to the world is obvious.  I don’t know what in the world Pope Francis was thinking while he stood there next to the Mufti and prayed or why he was even looking in the direction of Mecca for answers to his prayers. The only thing coming from Mecca for the past sixty years is terrorism and the shedding of blood. I am certain that the Imam was praying to Allah in Arabic while quoting from the Quran. At some point I am sure he exclaimed, “Allah u Akbar”. This is  the same acclamation that Muslims all over the world make every time they cut off the head of another innocent victim of Islamic Jihad.

In all fairness to the Catholic Pope he could have been crying over all the lost souls in the cities of Mecca and Medina as he looked toward the east in their direction. That is the only justification I can possibly think of for facing Mecca while praying. That might explain why the Pontiff turned toward Islam’s holy cities as he prayed with the Imam. After all Jesus wept over Jerusalem…

But the Pontiff’s visit was carefully orchestrated not to coincide with mandatory noon hour prayers at the mosque so as not to offend delicate Muslim sensitivities. Delicate?  Sensitive? I don’t think so. There is nothing delicate or sensitive about these brutal savages who cut off people’s heads in the name of their blood thirsty god. The Bible tells us to pray for unbelievers, not to pray with unbelievers. It tells us that Christians are children of the light and we are not supposed to have any fellowship with darkness. Therefore Christians should not pray with Muslims. We should pray for Muslims. It isn’t any harder to understand than that.

I know the Pope was only trying to be a messenger of peace, but you can’t make peace with a bunch of barbaric savages who are only intent on making more war. There is a time to make peace and a time to make war and this Pope should read the Book of Ecclesiastes over until he understands that. It seems to me like he cannot discern the signs of the times. He is also very lucky that he got out of Turkey alive with his head still attached to his shoulders. It would have made a fine trophy for ISIS or for any number of other Muslim groups over there.

Islam is a blood thirsty cult that worships a blood thirsty god. It was created by a blood thirsty tribal chieftain while waging a bloody war of conquest against all of his opponents. Most of Mohammed’s early followers were forcibly converted at the point of a sword and most Muslims today will only see the light at the tip of another sword, or the barrel of a smoking gun, or by some act of Divine intervention.  Brutal force is the only law that most Muslims have ever known and mercy and grace are two concepts that they don’t understand so it is a total waste of time for Pope Francis to bring an olive branch to the Muslim world. We cannot win them over to our way of thinking by turning the other cheek or praying to Mecca, or making any more concessions to accommodate them. Islam employs a rigid set of double standards whenever it comes to inter-acting with non-Muslims. It is customary and even acceptable in their religion for Muslims to lie to Christians and Jews in order to accomplish their goals.

We cannot placate Muslims by blinding ourselves to the truth. While it is certainly possible that Pope Francis could have been crying over all the lost souls in Mecca and Medina nevertheless the symbolism of a Catholic Pope who claims to be the official representative of Christianity facing east toward the Muslim holy city of Mecca and praying together with a Grand Mufti according to the Islamic custom is not lost upon millions of Muslims around the world. It appears like another concession that an official representative of the West is willing to make and it lends credibility to the idea that Islam reigns supreme in the world of religion and that Mecca and Medina are holy cities which they are definitely not. They are not holy to me and Islam does not reign supreme in the world or religion.

No Pope in recent memory has resigned from office except the last Pope. All Catholic Popes since Pope  Gregory in 1417 have died in office except for one.
That was Pope Benedict. There is speculation on just why Pope Benedict resigned. Perhaps he resigned because he would not cooperate with official plans for the Catholic Church to become more deeply involved in promoting the New World Order. What else would explain his sudden and untimely departure from the top position in the Catholic Church? He obviously didn’t like something about his old job at the Vatican.

The resignation of Pope Benedict paved the way for the elevation of Pope Francis. He is the first Pope from South America. He is the first Pope from a third world country.  Third world countries are all working very hard for a New World Order… a new roll of the dice in which they hope to get a better shake and a bigger piece of the world’s economic pie. But there can’t be a New World Order as long as the world is at war with the Uma. That is why Pope Francis visited Istanbul and prayed with the Mufti.  I know that if Jesus ever visits Istanbul which used to be the center of the Eastern Orthodox Church before it was overrun by the armies of Mohammed, and when Jesus meets the Imam of the Blue Mosque it won’t be to make concessions to Islam or to pray facing Mecca…  He will not be crying for their lost souls anymore.