Every year between the months of July and November millions of Oregonians watch helplessly as the federal government allows our state to go up in smoke.

There is an old saying that too much of anything is not good.  The federal government owns too much land.  700 million acres is too much land for Congress to control, and even if it wanted to it which it absolutely does not… Congress doesn’t know how to manage it properly. Neither does the Forest Service or the BLM. To put it bluntly the United States Forest Service and the Bureau of Land Management are completely incapable and unwilling to change their public land management policies to cope with wildfires, and our fearful State Legislators in Salem together with over two decades of incompetent Democratic Governors refuse to take the necessary steps to put an end to this annual destruction of our State forests, the heritage of every Oregonian. Our forests are just being allowed to burn to the ground every summer because there is no economic incentive to save them. Change is necessary. That is obvious, and it all starts with an honest admission of failure.

Depending on when you started counting last year there were somewhere between 25 and 40 wildfires raging across Oregon which turned the air last summer into a rather murky mixture of smoke and pollutants over vast swaths of our state.  It is almost as bad this year. It isn’t safe to go outside or even to breathe in some parts of the State right now. The largest wildfire last year was the Chetko Bar Fire which burned out of control for months near the coastal community of Brookings… It consumed over 3oo,000 acres of valuable timberland not to mention all the animals that were killed and the precious wildlife habitat that was destroyed. It laid waste an area almost 50 square miles wide. The residents of Brookings were put on notice to evacuate if and when it became necessary.

Last year in Lane County there were at least two fires raging out of control… The  Jones Fire burned over 6,000 acres near Fall Creek, and the Separation Fire near Cougar Reservoir burned over 4,000 acres. There were at least six other fires burning in or around  Lane County last year … the Horse Creek Fire, the Box Canyon Fire, the Roney Fire, the Pete Fire, the Avenue Fire, and the Rebel Fire… All together these fires consumed a total of at least 12,500 acres of Oregon’s natural resources. They all just went up in smoke… the trees as well as the animals sacrificed on the alter of ignorance. This year the destruction is just as bad.  The names have changed, but the destruction is the same.  Instead of the Separation Fire it is now called the Terwilliger Fire and it is burning whatever wasn’t consumed last year near Cougar Reservoir. It has already destroyed over 8,000 acres and the smoke from it is filling the McKenzie Valley over twenty miles away. 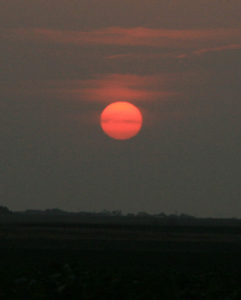 The smoke is so thick that you can stare directly at the noon day Sun without any protection for your eyes. That is all the proof that I need to convince me that the federal government should not be in control of 51% of Oregon.

Over fifty thousand square miles of my State is administered by Congress through the United States Forest Service and the Bureau of Land Management. This land was entrusted to Congress to administer properly, and Congress delegated the actual responsibility of managing the land to the United States Forest Service and the Bureau of Land Management, but trust really has nothing at all to do with it. The USFS and the BLM are responsible for preventing and controlling wildfires which break out on public land  every summer.  Some of these wildfires are caused by lightning, but others are caused by careless campers who don’t put out their campfires or toss a ligted cigarette out the window of their car window. Regardless of how the fires start every year they still burn valuable timber and destroy precious wildlife habitat. It is the responsibility of the U.S. Forest Service and the BLM to put these fires out, not just wait for the winter rains to do that for them.  Even better would be a strategy of preventing these fires from getting out of control in the first place.

Fifty thousand square miles is a total of thirty million acres of land which rightfully belongs to the people of Oregon. The United States Forest Service and the BLM couldn’t possibly do a worse job of preventing and controlling wildfires if they tried. More and more land is just going up in smoke every year and the federal government doesn’t even care.  More and more of Oregon’s precious natural resources are being lost to incompetent penny pinching government bureaucrats working hand in glove with environmental groups to allow our State forests go up in smoke. You would think that these environmentalists who love the forests so much that they don’t even want a single tree to be cut down would also want to keep these forests from burning to the ground, but they don’t.

There are ways to prevent Oregon’s forests from being destroyed. The first thing we need to do is remove control from Congress. We need to overturn the Federal Land Policy Management Act of 1976. The Oregon Legislature needs to petition Congress to turn over the management of Oregon public land to Oregon control.  Oregonians can do a better job of caring for our land than some federal bureaucrats in Washington D.C… We certainly couldn’t do any worse, could we?

Next Oregon should purchase a small fleet of inexpensive two foot wide drones equipped with highly sensitive infra red cameras that could spot a cigarette burning on the ground at 1,000 feet  to fly surveillance over every square inch of our public lands commencing at the beginning of every fire season in order to spot wildfires before they get out of control… An ounce of prevention is  worth a pound of cure. We should spare no effort to keep these wildfires from happening in the first place.. It is absolutely crazy to take the position that the ground is too steep or the area is too remote to save these forests… or that we can afford to just let them burn to the ground every year.  That is the current position  of the United States Department of Forestry.

There is a 747 jumbo jet outfitted with special equipment to fight forest fires. It is stationed right here in Oregon. It isn’t even being used most of the time.  The Federal government shouldn’t be in the real estate management business.  It is time to turn the administration of our public lands over to State control, not just here in Oregon but in all twelve western States.   Whatever Congress is doing with our public lands they are doing it all wrong, and they are doing it all without constitutional authority,