Ted Cruz’s Political Ambitions are even Bigger than his Head. That’s why the Nevertrumper Never Learns ! 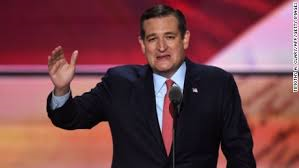 I saw the nerve of this guy again last night when he delivered a twenty minute address at the Republican National Convention and he only mentioned Donald Trump’s name once, and it was not to endorse him.

The delegates at Cleveland were very polite through most of his speech which was pretty good for the most part, but as he approached the end of his allotted time to speak and there was still no endorsement of the Party’s nominee, Donald Trump the boos began to occur, and they grew louder as he wrapped it up so by the time he ended his speech you could barely hear what he was saying anymore. He remarked that he appreciated the enthusiasm of the New York delegation.. I can assure you that the boos were not just coming from the New York delegation. They were coming from all over the arena. Ted Cruz got what he richly deserved. He got bood off the stage.

Ted Cruz came to believe in his own campaign rhetoric about being the only candidate in the Primary who could beat Trump and then go on to beat Hillary Clinton in the General Election. In reality he is a polarizing figure who could never beat Hillary Clinton, and he did not beat Donald Trump in the Primary.. Ted Cruz beat himself in the Primary, and he beat himself after the Primary… and with that speech he gave last night to the rousing sound of boos from all over the arena by the delegates at the Convention Ted Cruz  ended any further chance that he might have once had of ever being nominated to the Supreme Court. He will never win a national political office outside of the State of Texas after that speech that he gave last night and its fine with me because we don’t need a President who was born in Canada to a Cuban Canadian father and one who refused to give up his dual citizenship until just last year when he was 44 years old and he decided to run for President.