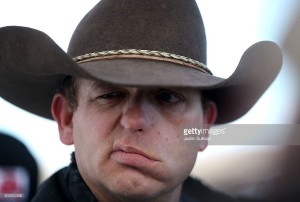 Ryan Bundy, the eldest son of rancher Cliven Bundy of Nevada was beaten up by Multnomah County Detention Center prison guards for refusing to allow the government to remove a bullet lodged in his upper right arm.  Mr. Bundy was a passenger in Lavoy Finicum’s truck on the day it was indiscriminately fired upon by FBI agents and Oregon State Police officers. Mr. Bundy was wounded in that incident, and six months later his wrist and thumb were both dislocated by prison guards and his head was smashed into a wall for refusing to allow government to remove that bullet in his arm.. During jury selection he was present in the courtroom and it looked like he had two black eyes according to eyewitnesses.

The bullet which is lodged in his arm was one of the shots randomly fired into Mr. Finicum’s truck on the day that Mr. Finicum was murdered by two Oregon State Police officers. It is one of the bullets that was unaccounted for and not reported by FBI agents in the aftermath of the investigation into the shooting death of Mr. Finicum.

Ordering prison guards to beat up Mr. Bundy and put him in solitary confinement until his trial isn’t going to break his spirit or persuade him to confess to something he didn’t do. It isn’t going to convince him to plead guilty to fabricated charges of a conspiracy to impede federal officers. A conspiracy includes the element of secrecy and the intent to do harm, and neither of these two things was ever present in the occupation of the Malheur National Wildlife Refuge. 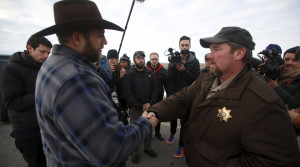 Everything that Ammon and Ryan Bundy did was out in the open. Most of the time it was in front of television cameras for the whole world to see. They were trying to focus the Nation’s attention on the important issue of public land management. They were motivated by good principles and their love and respect for the Constitution. There was no vandalism at the Refuge during the entire time they were there.  Nothing was taken. Nothing was stolen, and there was no intent to do harm.  The conditions for a conspiracy were not met and the proof is that although some of the codefendants did have guns at the Refuge for the sole purpose of their own personal protection, none of them ever fired a single shot. The FBI and Oregon State Police fired the first shots, the last shots, and they fired the only shots. 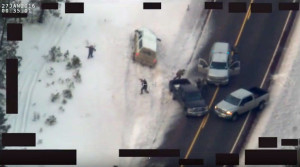 The bullet which is lodged in Ryan Bundy’s arm is the only evidence that implicates the FBI agent who randomly fired into Lavoy Finicum’s truck. It is evidence of professional misconduct not only because he fired his weapon randomly into the truck while there was at least one innocent passenger (Victoria Sharp) inside, but also because he failed to disclose that he had fired his weapon to police investigators after the shooting. It might even be the tip of an iceberg of evidence that clearly demonstrates a government plot to murder someone in Mr. Finicum’s truck that day… before Mr. Finicum ever stepped out of the truck and he was shot in the back. None of the passengers in the truck were resisting arrest at the time the unreported bullet was fired. Ryan Bundy wants this bullet to remain in his possession until he can be sure that it will be used to convict the people who murdered his friend. Ultimately he wants to give it to the Finicum family so they can use it in their lawsuit against the FBI and the Oregon State Police.

Mr. Bundy is a husband and the father of eight precious little children. He is a man of outstanding moral character and the same thing is true of his brother Ammon. Together they participated in a peaceful demonstration at the unoccupied Malheur National Wildlife Refuge in order to focus the Nation’s attention on the mis-management of America’s public lands. Their demonstration was peaceful until the FBI and Oregon State Police opened fire upon them.

The protest  began as a response to the unjust incarceration of two Oregon ranchers who were sentenced to jail for setting a controlled burn on their ranch land to manage weeds. The fire spread to adjacent land which they leased from the Bureau of Land Management and it burned about 130 acres of worthless scrub. There is a Bill currently before Congress sponsored by Representative Greg Walden of Oregon which would prohibit any future prosecutions of ranchers like Dwight and Steven Hammond for such an accident like this. 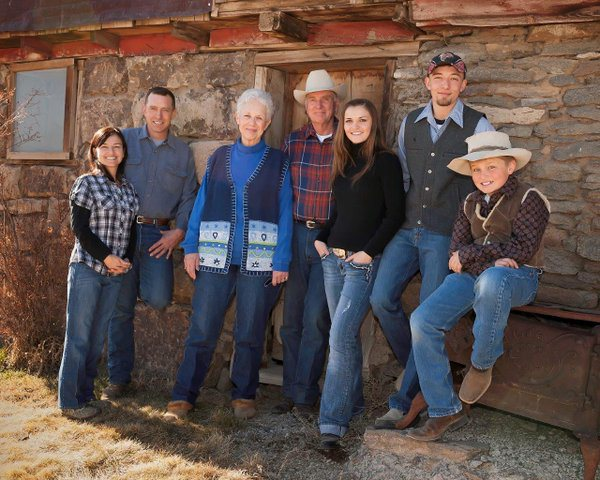 The Hammond family of Burns, Oregon

The Hammonds of Burns Oregon had already served time in jail for their alleged crime, but a year after their release Attorney General Loretta Lynch appealed the lower court decision which imposed the original sentences.  The Obama Justice Department wanted a stiffer penalty than the one  imposed by U.S. District Judge Michael Hogan. As a result the Hammonds were sent back to jail for an additional five years each. The obvious injustice of this second sentence is the reason that the Bundys came to Oregon and why they launched their protest at the Malheur National Wildlife Refuge.

The longer jail term imposed on the Hammonds was mandated under strict federal guidelines contained in an anti-terrorism act signed by Bill Clinton. This law was never intended to apply to unintentional acts of negligence, and it offends the conscience to think that it was. It offended the conscience of the original trial judge to impose more jail time than he originally did, and it offended the conscience of Ammon and Ryan Bundy when the Hammonds were sent back to jail to serve additional time.

The Bundys are good people. They were all brought up to believe in God and to love their neighbor as themselves. When they heard that the Hammonds were being re-incarcerated for the same offence twice they decided that they had to do something. They decided to stage a protest at the unoccupied Malheur National Wildlife Refuge near the Hammond ranch and the little town of Burns, Oregon.  It was the middle of winter. This protest grew to a thirty day occupation of the deserted Refuge, and the purpose of the demonstration just naturally grew to include the entire question of the administration of our public lands by Congress. 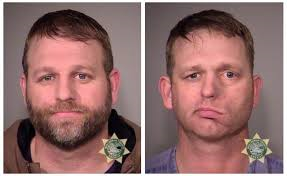 News crews from all over the world converged on the little town of Burns, Oregon to cover this modern day story of David and Goliath, but this time it looks like Goliath is winning.. The big government killed Lavoy Finicum with three shots to the back and just allowed him bleed to death in the snow. Then it arrested little David and all of his supporters. In the process Ryan Bundy was hit in the shoulder by bullet fired from a gun, not a rock launched from a slingshot. Then the FBI agent who fired his gun failed to report that he had fired his gun. Then the government Goliath locked them all up in jail without a trial, without bail, and without the presumption of innocence which is even guaranteed to murderers like the men who shot Lavoy Finicum in the back.

The Bundys still remain locked up behind bars six months later where they are still waiting for trial. Ryan Bundy was placed in solitary confinement where he gets just fifteen minutes a day outside of his cell and no visitors at all. Prisoners at Guantanemo Bay are treated better than this.. If he became a Muslim he would be taken out of solitary, given a Quran and probably invited to the White House to meet with President Obama. 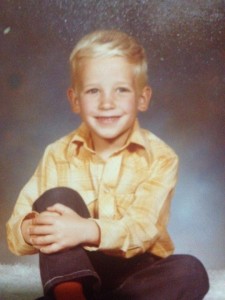 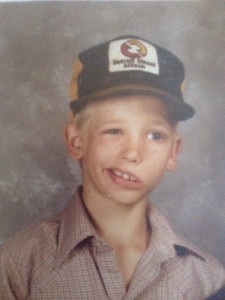 Ryan has always faced negative stereotypes. When he was just seven years old he was run over by a car. That car drove right over his head and damaged the nerves in his face. That is why he always looks like he is scowling. The nerves which control the muscles in his face are actually damaged from the accident and the right side of his face is permanently paralyzed. It is a miracle that he is even alive.

If being run over by a car didn’t kill him, then being run over by a team of government attorneys led by Loretta Lynch isn’t going to convince him to accept a plea bargain. Ordering prison guards to beat him up and put him in solitary confinement isn’t going to break his spirit nor persuade him to confess to something he didn’t do. His faith has provided him with all of the character he needs to resist temptation, and the adversity he has experienced in his life has taught him the value of determination.

Ryan Bundy has been fighting adversity since he was a little boy. People who know him well say that he is exceptional. When he was eleven years old he raised a pet steer which he entered in a competition at the County Fair. The steer was named Big Boy. It won the blue ribbon that year. When a very proud little boy took his blue ribbon home to show it to Big Boy, the steer was so impressed with the ribbon that he proceeded to eat it, leaving a very sad little boy nearly in tears. The judges gave him another ribbon and he decided not to show it to Big Boy ever again.

As a young boy Ryan was always doing things that were remarkable. Every year along with his father and his younger brothers he delivered potatoes and firewood to all of the widows and the elderly in his community. As a boy scout he won awards for bravery and for his swimming skills. One day he even saved someone’s life that was drowning.

For a grown man with eight children you can bet that money is always tight around the house… One year Ryan needed a new pair of boots. On a ranch boots are a very necessary thing. His old boots were barely held together by duct tape, but when Ryan heard that other people in his community had needs that were even greater than his own he gladly donated the money he had been saving for a new pair of boots to his church so that it could be used to help others. That is the kind of man that Ryan Bundy is. He came to Oregon to help the Hammond Family. He is a Godly man and a goodly man.

The United States government doesn’t have the slightest clue about the man they are prosecuting. According to people who know him well, Ryan Bundy is always motivated by higher principles. He has survived the misfortunes of life to become a husband and the father of eight children. He is not the kind of man that can be easily intimidated, and neither does he try to intimidate anyone else. None of the members of the Bundy family are awed by all of the secular power of the Federal government which is arrayed against them. Rather they fear God who made Heaven and Earth. We can learn a lot from watching Ammon and Ryan Bundy brave their moments of adversity. I have no doubt that no one will be able to coerce either  one of them to plead guilty to something they didn’t do, and quite frankly neither one of them would even consider doing something wrong in the first place. They lead exemplary lives which many Americans can learn from, and they live by a set of principles which are far greater than those of the government prosecutors who are trying to convict them.