Global Warming or Climate Change… or is it about Time for an Explanation Change? 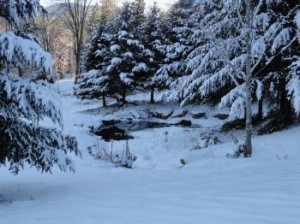 or is it about Time for an Explanation Change?

The temperature outside is a chilly minus ten degrees. I am not in Alaska. I am in Oregon, yet I don’t live in the mountains. I live around the edges of the Willamette Valley where the elevation is only about 400 feet above sea level. So what is going on with the weather here in Oregon and the climate in the rest of the world? Is this what liberals call global warming or climate change, or is it about time for an explanation change?

Right now there is an Arctic air mass heading straight for the Midwest and the people back there are bracing for extreme cold weather. Personally I think it is about time for an explanation change. I think we need to have a candid discussion about all of the politically correct science surrounding the so called theory of “global warming”.Then we need to take a cold, hard look at all of the facts surrounding what is really going on with the weather.

The only thing man made about the climate are all of the ridiculous assertions and explanations that are now being put forward by liberals in order to explain it.  All of the theories about anthropogenic global warming are in reality the baited hook being used to lure the nations of the world  into a new kind of world order, and this New World Order is being orchestrated by the United Nations.  Everything else you hear or read about climate change is a lot more cloudy, but at least that much is clear… Climate change is not a science. It is science fiction. It is more about making money than it is about making the earth’s climate any better.

At first climate scientists said that the earth was being affected by global warming so we had to stop burning fossil fuel because fossil fuels release greenhouse gases into the atmosphere when they’re burned. By the way I don’t burn fossils. I burn diesel or gasoline in my engines… or at least that’s what I used to burn before paranoid liberals got their hands on the state and federal agencies responsible for regulating it.  Now the mixture I put in my gasoline tank is part gasoline and part ethanol, but there are still no little fossils in it!  In order to please these radical liberals our government started requiring oil companies to add MTBE (Methyl Tertiary Butyl Ether) to the gasoline. For more on the environmental disaster caused by adding MTBE to gasoline please read the corroborating link at the end of this article.  MTBE was discovered to be extremely toxic to the environment so after first requiring all of the gasoline sold in the United States to contain this additive the authorities eventually realized their mistake and banned it altogether starting in California.

Today most gasoline is mixed with 10% ethanol thanks to our paranoid, radical, greenies, but now they are pushing hard to increase the amount of that ethanol in the gas. They want to raise the amount  from 10% to 15%.  Ethanol is harmful to the rubber seals and gaskets in the fuel systems of small engines so you can’t leave the gas in the lawn mower over the winter without the risk of springing a leak in the summer. You have to drain the gas out of the engine before putting it in storage.

Liberals are always trying to make things better. The only problem is that they are usually trying to improve the same things that they have previously destroyed by legislating their ignorant opinions upon the rest of society. As I said I don’t burn fossil fuel in my engines and I never have. I burn gasoline or diesel…  and it is debatable whether the oil which is used to produce that gasoline or diesel actually comes from little fossils or not. It could be the result of an ongoing chemical process occurring deep within the earth that has nothing at all to do with the ancient remains of little sea shells or the bones of prehistoric dinosaurs.

Now the so called environmental experts are telling us that the current global weather patterns can be explained by a phenomena that most of them used to call global warming but now they prefer to call it by its more politically correct name… climate change. The name change comes after it was proven that climate scientists were fudging the data they were collecting on global warming several years ago at East Anglia University in England. The actual scientific data showed that the earth was not really warming. This was the first explanation change. It occurred when they switched their terminology from global warming to climate change. It was the first acknowledgement that something was wrong with their theory. The earth was not warming across the entire planet. Global warming was not global. It was only regional or local. The weather patterns were just shifting. This is a much less catastrophic scenario than the actual warming of the whole planet, but they have never publically admitted that…  and why should they? It would not help motivate the masses of misinformed people who are used to listening to nightly environmental sermons on the news which are designed to help them make the fundamental changes in lifestyles that social engineers want to them to make like burning less fossil fuel, but paying more for the energy they use so instead they just continue with all of the fear mongering.

Shifting weather patterns do not pose the same cause for alarm that global warming does, but liberals keep acting like they do. They keep claiming that the earth’s shifting weather patterns are just as dangerous as global warming is and they insist that the earth’s shifting climate is caused by the same combination of anthropogenic factors that their discredited theory of global warming was. They are trying to convince the whole world that shifting weather patterns are caused by burning fossil fuels and the solution to the problem is still the same. We  have to reduce our carbon footprint or the oceans will rise and flood the land. In order to save the earth from this impending disaster we will all have to pay more for the privilege of burning fossil fuel. All that remains of those little prehistoric sea anemones and liquefied dinosaur bones which have been refined into the gasoline that we all put in our tanks are the cause of the whole problem. That is the message they keep repeating… and everyone has to do our part by paying higher prices and making the other painful sacrifices imposed on us by our justifiable concern for the environment.  That is the message that is preached by the global warming alarmists..  It is a bogus sermon.

While we are on the subject of preaching and sermons let me ask you a simple question. What does the Bible have to say about global warming?  It actually says something.  It says that global warming is going to happen, but when it occurs it will not be man made. It will be Heaven sent and there will be nothing that anyone on earth can do about it except to repent of their sins and turn from their wicked ways and accept Jesus Christ as their personal savior…

“And the fourth angel poured out his vial upon the sun and power was given unto it to scorch men with fire… and men were scorched with a great heat and blasphemed the name of God which hath power over these plagues and they repented not to give him glory.”  -Revelation 16:9-10

Does that sound like the real solution to global warming is selling more carbon credits and burning less fossil fuels? You see global warming will be real one day, but when it comes it won’t be caused by man and there won’t be anything that anyone can do about it either. It will be the judgment from God upon an unbelieving earth.

I don’t know about you, but something smells pretty fishy about all of the fear mongering being put out by the politically correct scientists led by the United Nations.  It might be the odor of little sea shells being slowly refined into the gasoline I put in my tank but it smells more like the stench that originates at the juncture of business and politics where unprincipled con-men like Al Gore reap huge profits by exploiting the ignorant fears of the masses by pushing their idea of carbon credits on the world and convincing people to invest in alternative forms of energy. That’s what it actually smells like to me.

Whatever it turns out to be that is causing such a stink about global warming it will soon become known, but in the meantime these same climate alarmists are now warning us that the ocean temperature is rising too. You know what the solution is… We all have to burn less fossil fuel of course and pay more for the privilege of burning the little fuel that we are still allowed to burn… That should send the price of electricity skyrocketing through the roof like President Obama said he wanted to do.

If you liked this article please sign up for my Free RSS Newsfeed at the top and bottom of the page. Thank You.