The Politics of Food…and the Fingerprints of Michelle Obama 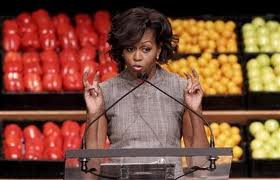 The Politics of Food

… and the Fingerprints of Michelle Obama

Usually when I sit down to write an article about politics I am only mildly angry about something. We live in a very big country thankfully, and what goes on in Washington D.C. is usually very hard to personally experience three thousand miles away in Oregon. That’s a good thing, and it is one of the best reasons I can think of to live here. But this time it is different. This time I am as mad as a spitting camel. I am almost consumed with anger. I am about as mad as a hatter over the latest government intrusion into my life.

I just got off the phone with the customer service representative for one of the largest commercial bakeries in the United States. The name of the company is Bimbo Bakeries. That’s a very unusual name for a bakery don’t you think? Their U.S.A. headquarters is in Horsham, Pennsylvania. The name of the company seems very appropriate in view of the circumstances surrounding my phone call. In American parlance a “bimbo” is a slang word used to describe someone who is rather stupid, just a little bit slow on the uptake, maybe a few bricks short of a load, and certainly not the brightest bulb in the box. However when I called the company their receptionist did not answer the phone Bimbo as I would have expected. Instead she pronounced the name of the company “Beembo” Bakeries… Beembo ???  More about that later!

However the name is pronounced, Bimbo Bakeries is one of the largest bakeries in North America, not just in the United States mind you, but also in Canada, Mexico and Central and South America as well. They bake bread… all kinds of bread… and pastries too. And out of all the different kinds of bread that they bake, there was one variety in particular that I liked. It was called Oroweat Oatnut Bread. I am sure I wasn’t the only one who liked that bread because it literally just used to fly off the grocery store shelves.

This bread was delicious right out of the bag. You didn’t need to toast it, put butter on it, or jelly or jam. I would frequently eat half a loaf untoasted before I ever made it home from the store. Now that was a good loaf of bread! The texture and the taste of that bread were just perfect, and the consistency was so light and fluffy that it almost melted in your mouth. Plus… it was actually good for you too.  It was loaded with whole grain oats and hazelnuts. If that loaf of bread was a piece of art, I would have called it a Rembrandt or a Michelangelo. But so much for old fashioned wholesome goodness!

For about the past year I have still been buying this bread although I have not been particularly enjoying it. I can’t remember the last time I ate a piece right out of the bag untoasted without butter or jelly on it and actually liked it. But I just thought it was an anomaly. Perhaps the baker was having a bad night, or a few bad nights…Maybe he was off his game. I didn’t draw any further conclusions. But I should have known better. This has been going on for more than a few months and I hadn’t been paying that much attention.

I would purchase my favorite loaf of bread, take it home and put it on the countertop in exactly the same place I always put it. The next morning I would open the plastic bag, remove the heel and look at the first few pieces and taste the bread. Then I would work my way through the rest of the loaf hoping that as I got closer to the middle that both the taste and the texture would improve…They never did. Then I would throw the entire loaf in the garbage. Every time I purchased another loaf I thought it would get better…back to the way it used to be. But it never did!

Finally yesterday was the proverbial last straw for me, or in this case the last loaf of bread. I’d had enough. There were just too many un-flavorable experiences. This wasn’t just an isolated instance anymore or a series of isolated instances. It was not an irregularity, or just another bad night for the baker. There are plenty more loaves of this bread still on the shelves of my grocery store, but I won’t ever be buying any more of them….NEVER!

So I decided that I would call the company and find out what the heck was going on. I found a number on the bag for their consumer relations department and I called it. Someone answered the phone, Hello this is “Beembo” Bakeries. I dispensed with the pleasantries. Almost the very first words out of my mouth were, “Did you change the recipe of Oroweat Oatnut bread and if so why”?  I was angry. I must have wasted over fifty dollars over the past twelve months on bread that I really didn’t  like anymore and I wound up having to throw away. “What have you done to my favorite bread”, I asked them.

Their answer astonished me. I wasn’t prepared for what they told me. “Yes sir we did change the recipe about a year ago in an effort to lower the sodium content and make the bread healthier for you.” For me??? I thought to myself… this has the fingerprints of Michelle Obama all over it. I never thought that her healthy food initiatives program would impact me so personally and so directly as to get me to actually stop buying bread, but it has! And it happened so quickly too!

…”to lower sodium content”. Those words were still ringing in my ears when I thought, “Now where the hell would they ever get an idea like that from?” That Oroweat Oatnut bread used to taste so damn good and it was so good for you too, until Michelle Obama’s government controlled food scientists got their grimy little hands on it and started messing around with the recipe in order to “make it healthier for me”. There never used to be any loaves of Oatnut bread left on the shelves at the grocery store at the end of the work-week on a typical Friday night when the deliveries would stop until Monday morning. Now there are plenty of loaves left on the shelves over the weekend that are not finding their way into shopping carts and through the checkout lines. Way to go Barack and Michelle! Good job Bimbo Bakeries!

This is all part of Michelle Obama’s  healthy food initiatives program that goes hand in hand with her healthy school lunch program, and her efforts to get restaurants to limit serving sizes, and list the calories of all their menu items. Congratulations Michelle Obama, you have somehow managed to intimidate enough food vendors and manufacturers that Americans will now be eating less, eating out a little less, and enjoying life a little less too!

Under Socialism we must all earn the same pay, live the same way, and eat the same thing. And above everything else, we must all enjoy the same level of economic prosperity, or the lack of it. After all this is Communism we are talking about… Communism under a different label is called Socialism or Democrat Progressivism! Whatever it is called, it always leads to the same thing. It always ends up in more State control and big government tyranny.

If some people need to eat low fat, low sodium bread under a doctor’s orders then we all have to eat the same low fat, low sodium bread. We all have to suffer equally because this is Communism we are talking about. Just wait until the Federal government actually starts paying for your health care under the single payer system that Democrats envision. Then you will really see just how serious they are about all of this. If some people can’t eat high fructose corn syrup or they can’t have large amounts of sugar in their diet, then we all must limit our sugar intake and share in their personal misfortune, because in a Socialist society afterall you not only share in the success, but you also share in the pain and suffering. Shared success and shared pain and suffering is the real motto of Communists. No sugar, no salt, zero cholesterol and zero grams fat, no high fructose corn syrup, no hydrogenated vegetable oil, and no damn good either!

By the way Bimbo which is pronounced “Beembo” is a Mexican company. They purchased the Oroweat line of breads and baked goods from George Weston Bakeries in 2008. That is why they pronounce the name “Beembo” not Bimbo the way it is spelled in English. That is also why there is a greeting in Spanish on the company phone when you call their American headquarters in Horsham, Pennsylvania. I don’t think there are many Mexicans living in Horsham Pennsylvania who can’t speak English.

It was back in 2008 when this Mexican company took over what was already one of the largest bakeries in North America That was when they also took over production of the Oroweat line of breads and pastries. Mexico is a Socialist country. Most Mexicans are Socialists. When they come here to the United States they become Democrats, and they vote for Democrats. Do you think that just maybe the new owner of Bimbo Bakeries might be more willing to listen to Michelle Obama’s pleas and follow her healthy food guidelines because he is a registered Democrat? Personally I still think that “Beembo” should be pronounced Bimbo, and a bimbo is someone who is estupido!  I also think that they should have left both the recipe and the bread just the way that they were!