Out of Control E.P.A. and Power Hungry Oregon D.E.Q. Claims they Found Levels of Toxic Mercury in the McKenzie River.

It’s not a Little Mercury in the River.  It’s Really Just a Big Chevrolet !

The Current Battle for Control of One of Oregon’s Most Beautiful Rivers.

Oregon Dept. of Environmental Quality claims they found Mercury in the McKenzie River…

(plus good jobs that will last for a lifetime!) 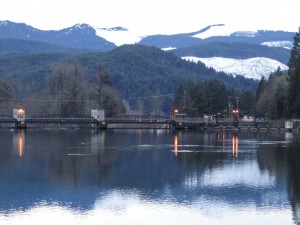 Leaburg Lake on the McKenzie River

The McKenzie River is one of Oregon’s cleanest and most pristine rivers and it is already one of Oregon’s most protected rivers. Certain parts of it are designated as a “Wild and Scenic River” by the United States government. Those parts of the river receive the strictest federal protections. The McKenzie River is well known to fly fishermen and drift boat enthusiasts alike. People from all over the world come to Lane County to fish in its clean waters and ride its lovely rapids, but wait… the rapids aren’t the only thing that is raging. The battle for control of the river is raging once again too…

It is common knowledge that the Coast Fork of the Willamette River as well as the main body of the Willamette River to a lessor extent contain abnormally high levels of mercury from abandoned gold and silver mines located in the Bohemia Mining District. These mines are located in the mountains south east of Cottage Grove.  These old mines have been leaching their toxic contaminants into Cottage Grove Lake and Dorena Reservoir since the mid 1940s. One of the old mines is even on the Federal E.P.A. Superfund List, but none of these abandoned mines are located anywhere near the McKenzie River nor any of its tributaries.  These mines as well as Cottage Grove Lake and Dorena Reservoir are all over the mountains in a completely separate river valley which is drained by the Coast Fork of the Willamette River.

Now along comes the Oregon D.E.Q. in 2008  which is following in the footsteps of the Federal Environmental Protection Agency. (E.P.A.) which recently set new stricter national standards for the maximum allowable level of mercury in fish which are caught for human consumption. The D.E.Q. found small traces of mercury in two species of migratory fish that were caught near the confluence of the McKenzie and the Willamette Rivers. To the best of my knowledge no one even eats these two species of fish that were chosen to do the sample testing. They are the Northern Pikeminnow and the Large Scale Sucker fish. Nevertheless the Oregon Department of Environmental Quality has now added the beautiful McKenzie River to its growing list of polluted rivers in Oregon. That list isn’t the only thing that is growing. The D.E.Q.’s  power and control over our lives is growing too, along with the reach and scope of the Federal E.P.A. Both of these massive government agencies are out of control and they need to be reigned back in. 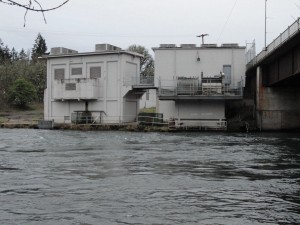 The McKenzie River is the sole municipal drinking water source for the City of Eugene which diverts its allotted share of water to the Eugene Water and Electric Board (E.W.E.B.) Hayden Bridge Water Treatment Plant located in Springfield.  E.W.E.B. takes actual test samples of water four times a year at their intake facility near Marcola Road. They have never detected any measurable levels of mercury in any of the raw water samples they have tested in their entire one hundred year history… not even once! Therefore officials at E.W.E.B. have disputed the accuracy of the State D.E.Q. findings and they question the wisdom of sampling a migratory fish that is known to swim back and forth between the McKenzie River and the Willamette River.

In addition to being out of control, the power hungry State Department of Environmental Quality has demonstrated a remarkable lack of  knowledge of our local environment. So has our main newspaper in Lane County, the Eugene Register Guard. They recently published a front page article by an ambitious young reporter named Josephine Woolington entitled, “DEQ finds Mercury in the McKenzie River.”  The alarming title of Miss Wollington’s story along with its  prominent position on the first page above the fold was nothing less than outrageous. The placement of the story and the title was intended to grab the reader’s attention and to get them to form an incorrect conclusion before even reading the rest of the article.  One of the anonymous sources that Ms. Woolington quoted in her story said that he wouldn’t be surprised if the McKenzie River tested positive for mercury since the river flows over rocks which might contain mercury. Might contain mercury?… Really? I might be the King of Saudi Arabia, but I’m not!

It should be noted for scientific purposes that minerals are always found in rocks although not every rock contains all of the minerals. Our whole planet is just a great big rock. Minerals come from rocks, but minerals don’t usually get into the water in detectable amounts sufficient to measure unless the rocks containing those minerals are disturbed in some way.  For mercury to be found in the River the rocks have to contain mercury. Then they have to be disturbed in some way in order for the mercury to be released into the river. Minerals don’t usually get into the water stream unless those rocks containing them have been blasted or crushed in a mining operation. This is especially true for mercury which is only found in certain types of rocks. Unless those rocks containing mercury have been blasted and mined the mercury usually stays locked up in those rocks for all time. It doesn’t get into the drinking water of the McKenzie River.

Pollution in Oregon’s rivers is a rather recent phenomenon. It is caused primarily by four different things: 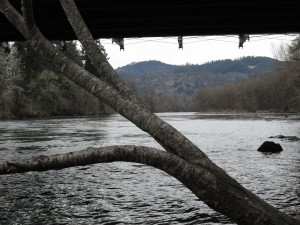 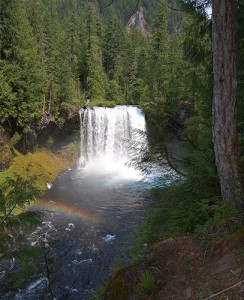 The main source of the McKenzie River is a series of large springs bubbling up in the forested peaks of the Cascade Mountains near Clear Lake. Extensive testing of the water downstream from these sources has never indicated any pollution in the McKenzie River of any sort… including mercury. The old Bohemia Mining District is the principal source of toxic mercury in the Willamette River. This pollution enters Cottage Grove Lake and Dorena Reservoir from Big Creek and Sharp Creek which drains Bohemia Mountain and the old mining district. From there the tainted water flows into the Row River and enters the Coast Fork of the Willamette River.  The Coast Fork of the Willamette River joins the main body of the Willamette River near Pleasant Hill and Jasper. About fifteen miles downstream from there and about ten miles west of Springfield the beautiful McKenzie River adds its pristine waters to the mix.  It was somewhere near there that the Northern PIkeminnow  and the Large Scale Sucker fish were caught in 2008 and 2009 which tested positive for mercury in trace amounts. These are migratory fish that they caught which swim back and forth between both rivers. It doesn’t take a rocket scientist to figure out where the source of the mercury in the fish is coming from, and it isn’t the McKenzie River.

Karl Morgenstern is Eugene Water and Electric Board’s Water Source Protection Coordinator. He went on record this week stating that the D.E.Q. tested the wrong fish. The fish they sampled were both migratory fish that swim back and forth between the waters of both the Willamette River which is polluted and the waters of the McKenzie River which is not polluted. For a more reliable indicator of the actual water quality of the McKenzie River they should have tested actual water samples the way that EWEB routinely does or they should have sampled a type of fish that doesn’t ever leave the McKenzie River such as the resident Cutthroat Trout or the McKenzie Rainbow Trout. They could have tested the sediment on the bottom of the river, but they didn’t. The real objective here was not to arrive at the truth of course. The real objective is to lock up the McKenzie River in perpetuity and to prevent more people from living along its banks or anywhere in the beautiful McKenzie River Valley. They just don’t trust people to take good care of the river.

If you enjoyed this article then please sign up for my free RSS Newsfeed located at the top and bottom of this page.