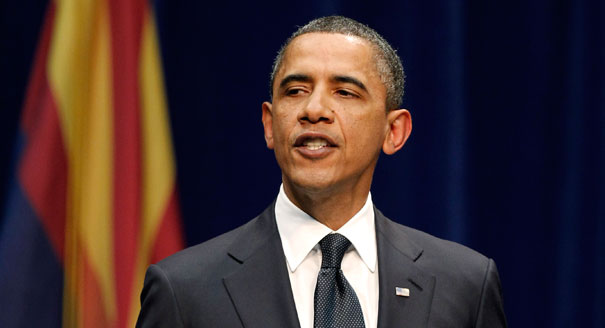 He looks right into the camera and smiles and then he says something that you know is entirely untrue, that belies the facts and the record, and defies reality!

Lie #1  “When I came into office four years ago the world was divided. Now it isn’t.” Is there anyone out there who actually believes that? Is there someone stupid enough who really believes that the world isn’t just as divided as it always was, and more precisely if you do believe that, do you seriously think that it is because of anything that Barack Obama has done while he has been in office? If you do then please stop reading this article right now and get yourself over to the nearest hospital emergency room for an immediate health checkup. There is obviously something very wrong with you!

Lie #2  “I have provided strong leadership and a very clear vision for the future.” May I ask a question? What normal person with average intelligence who has been paying any attention to American politics in the last four years actually believes that gross mischaracterization? To listen to Obama tell it, he is just the bee’s knees or the cat’s meow. He obviously has a very high opinion of himself. And that is about the only thing that is really clear about the past four years!

Lie #3   Referring to Mitt Romney’s recent accusation that President Obama conducted a worldwide apology tour shortly after taking office in 2009, Barack Obama said that he did not apologize to the world for America and that Governor Romney’s statement was just not true. Then what do you call it when Barack Obama gave a speech in Strasbourg France in April 2009 on his first State visit abroad and said this:

“…We must be honest with ourselves. In recent years we’ve allowed our Alliance to drift. I know that there have been honest disagreements over policy, but we also know that there’s something more that has crept into our relationship. In America, there’s a failure to appreciate Europe’s leading role in the world. Instead of celebrating your dynamic union and seeking to partner with you to meet common challenges, there have been times where America has shown arrogance and been dismissive, even derisive.”

In a speech at the opening ceremony of the Summit of the Americas on April 17, 2009 President Obama referring to our relationship with Latin American countries said this:

“All of us must now renew the common stake that we have in one another. I know that promises of partnership have gone unfulfilled in the past, and that trust has to be earned over time. While the United States has done much to promote peace and prosperity in the hemisphere, we have at times been disengaged, and at times we sought to dictate our terms. But I pledge to you that we seek an equal partnership. There is no senior partner and junior partner in our relations; there is simply engagement based on mutual respect and common interests and shared values. So I’m here to launch a new chapter of engagement that will be sustained throughout my administration.

In a speech given at the National Archives in Washington D.C. on May 21, 2009 President Obama speaking about our role in fighting the War on Terror said the following:

“Unfortunately, faced with an uncertain threat, our government made a series of hasty decisions. I believe that many of these decisions were motivated by a sincere desire to protect the American people. But I also believe that all too often our government made decisions based on fear rather than foresight; that all too often our government trimmed facts and evidence to fit ideological predispositions. Instead of strategically applying our power and our principles, too often we set those principles aside as luxuries that we could no longer afford. And during this season of fear, too many of us…Democrats and Republicans, politicians, journalists, and citizens fell silent.

In other words, we went off course. And this is not my assessment alone. It was an assessment that was shared by the American people who nominated candidates for President from both major [political] Parties who, despite our many differences, called for a new approach…one that rejected torture, and one that recognized the imperative of closing the prison at Guantanamo Bay…”

“…There is also no question that Guantanamo set back the moral authority that is America’s strongest currency in the world. Instead of building a durable framework for the struggle against al Qaeda that drew upon our deeply held values and traditions, our government was defending positions that undermined the rule of law.”

Regarding Mitt Romney’s characterization of President Obama’s first official trip abroad as the Presidential Apology Tour, it could just as easily have been called the Presidential Mea Culpa Tour, or Obama’s Reconciliation tour, but whatever it is labeled it is clear that wherever Barack Obama went, he felt the need to make atonement for America’s real past or imagined sins. Many Americans at home who followed his progress overseas felt that his actions were inappropriate, embarassing, and needlessly self-effacing, and that they did not represent the best traditions of America.

After listening to several of his speeches on his so called “Apology Tour”, the speech in France, the speech in Turkey, and the speech in Egypt,  I can unequivocally say that while he never did use the word apologize, or actually say I’m sorry, he was clearly being deferential in his demeanor, and he was deliberately trying to define a new and different role for America in the 21st Century… by establishing a new kind of posture for America in our bilateral relations with other countries.

Lie #4  “Our relationship with Israel has never been stronger that it is today.” Perhaps President Obama should take a random sampling of Israeli public opinion, or just ask their Prime Minister Benjamin Netanyahu how he feels about our relationship after recently being denied permission to even meet withPresident Obama while he made plenty of time to meet with Egyptian President Mohammed Morsi. Maybe President Obama should just ask an average Israeli on the streets of Jerusalem how they feel about our relationship after his Administration recently refused to recognize Jerusalem as their nation’s capital. Oh, but I forgot. He hasn’t even visited Israel yet, since he became President. He has traveled to just about every other place else in the Middle East except Israel and Tehran. He might try to explain to fearful Israelis who are distributing gas masks right now, and clearing their bomb shelters for use why our U.S. delegation to the United Nations didn’t walk right out of the General Assembly in support of Israel just as soon as Iran’s President Mahmoud Ahmadinejad opened his big mouth and began spouting his latest anti-Semitic rant as past American administrations have done.

Lie #5  And the fifth big Obama lie was when he said at the second Presidential debate that, “I accept full responsibility for anything that goes on during my administration. I am responsible.”  That has got to be one of the biggest bald faced lies that he has ever told! Why he hasn’t stopped blaming George Bush since the day he was first sworn into office. He even had the nerve to mention his name in all three of the Presidential debates!