Netanyahu Wins Historic Fourth Term as Israel’s Prime Minister and Says No to Any Two-State Solution. 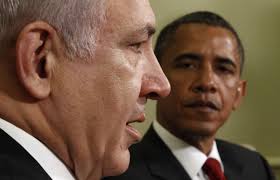 There isn’t going to be a Two State Solution

There is just a Twenty-Two State Solution…

and if the Arabs don’t like it, that’s Tough!

Take a good, long look at the expression on Barack Obama’s face. That just about says it all doesn’t it?  Benjamin Netanyahu won an historic fourth term as Israel’s prime minister in spite of the fact that Barack Obama openly supported his opponent. Even more importantly he won by a landslide. Now Benjamin Netanyahu has become Israel’s longest serving prime minister. More people voted for Bibi this time than voted for him the last time. Unfortunately you can’t say the same thing for the man in the picture with the angry look on his face.  Apparently that little fact is lost upon our arrogant President who is very unhappy at Bibi right now, but Bibi will be around a long time after Barry is gone. Thank God for that. It just cant happen soon enough for me.

Did you know that more Israelis voted for Benjamin Netanyahu in the recent parliamentary elections than voted for any other prime minister in Israel’s brief history? Now that is in spite of the fact that the Obama Administration and the liberal press in Israel were both actively working to undermine his campaign and support his opponent. Nevertheless the Israeli people returned him to office in a decisive electoral victory which has led to harsh words being uttered by all of his political opponents including President Obama.  It’s a lot of political sour grapes if you ask me.

President Obama is threatening to “re-evaluate” America’s relationship with Israel at the same time he is negotiating a nuclear arms proliferation agreement with our enemies in Iran who promise death to America and death to Israel. I would frankly like to re-evaluate America’s relationship with Barack Obama. I have a two state solution for him. I would like to send him to Hawaii or Illinois… just anywhere but Washington D.C.

So what did Benjamin Netanyahu promise the Israel voters that resonated so much with them?  He said, “There isn’t going to be a two state solution.”  The idea of a separate state for the Palestinians is over at least for now as long as the Palestinians keep electing terrorists to govern them.

So the peace process is dead. There isn’t going to be any two state solution at least for now, but I have a little solution of my own. It’s the twenty-two state solution. Twenty-one states for Arabs and one secure state for the Jews… and if the Arabs don’t like it that’s just tough!

Did you know that there really aren’t any Palestinians in the Middle East? There aren’t any Palestinians anywhere in the world for that.  It’s a total lie. The people who call themselves Palestinians are just Arabs no matter what they chose to call themselves, and Arabs are not Philistines. All of the Philistines have been dead for thousands of years. You cant’ become someone else by just changing your name and stealing their identity. That just makes you a fraud. How does the old saying go? A rose by any other name is still a rose and it smells just as sweet. The Palestinians are Arabs. They have no ethnic or historical connection to the ancient Philistines.

So all of the so called Palestinians today should get ready to leave the West Bank and the Gaza Strip and move across the Jordan River which would make for a reasonable border between Israel and the Arab world… There is no point in cutting Israel into two parts to please the United Nations. The Jordan River on one side and the Mediterranean Sea on the other side would make for safe and defensible borders that Israel could live with instead of drawing an arbitrary line on the map zig-zagging its way through the heart of the West Bank and letting Israel install a concrete barrier to keep the terrorists out.

Just as the Arabs didn’t want a single Jew to live in the land they hoped to obtain for a Palestinian state I don’t think a single Arab should live in Israel. What is good for the goose is good for the gander.

If you enjoyed reading this article then please remember to let me know by clicking the LIKE Button below and sign up for my FREE RSS Newsfeed located at the top and bottom of this page. Thank You