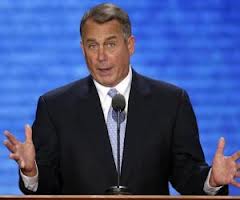 John Boehner Should Resign as Speaker of the House of Representatives

But Instead He is Set to Betray Us !

I am not as disappointed in Mitt Romney for losing the 2012 General Election as I am with the RNC for supporting him in the first place, both before and during the long Republican Primary, and way before he secured the necessary delegates.  After all Mitt Romney was just being himself. He was just being what he always was, and always will be… an east coast, Harvard educated liberal Republican. I am far more upset at the RNC for foisting him on the GOP in the first place! They would not listen to the TEA Party, nor to other conservative elements within our ranks when we asked them to support a real conservative candidate this time instead of Mitt Romney.

They could just as easily have supported Congresswoman Michele Bachman, or former Senator Rick Santorum from Pennsylvania. With the same amount of money and inside support that they lavished on Mitt Romney’s campaign, either of one of them could have done just as well or probably even better than Mitt Romney did! But instead the GOP Establishment just keeps on feeding us more of the same old moderates and liberals to run for National political office that are in Washington right now…  candidates who are typical politicians just like the members of the old political paradigm that are already there. The worst of these, and by far and away the most important of these politicians is John Boehner, the Republican Speaker of the House

Even in Michele Bachmann’s tight Minnesota Congressional District race the Republican Party did absolutely nothing to help her campaign. Reince Priebus and the rest of the unripe bananas over there at the RNC literally did not send Michele Bachmann one dime to help with her tough re-election campaign even though Mark Levin noted on his national radio program that he was given personal assurances by Reince Priebus himself that they would send her money in the event of a close race.  And it couldn’t have been any closer due to redistricting.  She barely managed to squeak out a slim victory margin of about 1500 votes, and yet not one nickel of that promised help was ever forthcoming from the R.N.C.  Levin mentioned this on his popular radio show last week, and he also said that Reince Priebus was no longer welcome to come on his program because he lied to the popular talk show host.  The truth is that the RINO Establishment in Washington would much rather see Michele Bachmann lose her Congressional seat to a Democrat then to see her back in in the Halls of Congress again!

Like the Senate Minority Leader Mitch McConnell, and the second in command of the U.S. House of Representatives Eric Cantor, the Speaker of the House John Boehner is a magna cum laude member of the progressive Republican Establishment.  He is willing to cut deals with Democrats and compromise on matters of principle! John Boehner should resign right now as the Speaker of the House before he does any further damage, and the House of Representatives should select a new Speaker to lead them in the next session of Congress. Otherwise we are going to get sold down the political river by John Boehner in the next session, first on the fiscal smoke and mirrors negotiations going on right now with the White House, and later by some kind of illegal aliens amnesty program favored by Democrats. Boehner has already removed four authentic Tea Party conservative Republicans from their important positions on key Congressional committees including Tim Huelskamp.  After John Boehner steps down which I think is an absolutely necessary first step, then Reince Priebus should also tender his resignation, pack his bags, and board the next red-eye express back to Madison, Wisconsin. We’d all be a lot better off without either of them in Washington D.C. anywhere near our purse strings or our Constitution!

This is the link to a new, better, safer, and more friendly social network… If you liked this article then come join us for a better way to debate the most important issues of our time… and start building up sweat equity in your own news and social network at the same time!  http://wepluribus.net/index.php?do=/