Facing Off Against Facebook – Fighting Back Against the Social Media Giant! 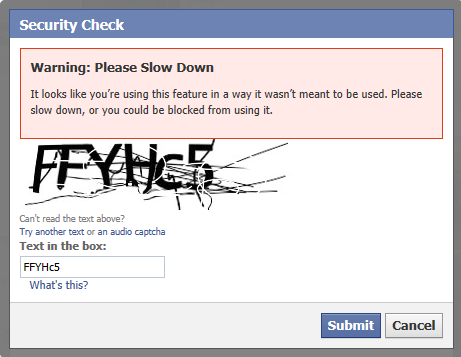 Taking off the Kid Gloves & Putting on Our Boxing Gloves

The lines have been drawn. The positions are hardened. The protagonists in this fight are Facebook with over a billion users and a virtual monopoly of the social networking industry on one side, and its most devoted users on the other side. These are the people like myself who spend hours every day on the internet trying to do what Facebook claims you can still do on their social network  i.e. “connect with the people in your lives.” But instead of connecting with our friends, we keep connecting with Facebook’s Office of Community Standards which keeps disconnecting us from our friends and all of the groups that we belong to.

The Office of Community Standards which is routinely referred to by a growing number of Facebook users as the “Facebook police” keeps sending us these unwelcome pop-up windows with security checks or Captcha phrases. These are the hidden little letters and numbers that are buried in the webscribble that Facebook sends to its least favorite users, and forces them to identify before allowing them to re-connect with their friends. Allegedly these security checks are supposed to help make Facebook more safe. But safe from what I ask… worms or the the dreaded conservatives that use their network?

I have an interesting question. Just how many of these inconvenient little security checks does one have to pass in order to prove to the Facebook police (and Mark Zuckerberg) that we are really people and not google bots? Lately I have been receiving these annoying security checks every time I try to post something. I received thirty of them in a row the other day and of course I answered them all correctly. It was a hassle, but I did. So does their Office of Community Standards still consider me to be a worm… because after I passed all thirty of these annoying little security checks, Facebook still sent me another one the very next time I tried to post something.  Perhaps Mark Zuckerberg thinks that all conservatives are worms, but I have not read anywhere in Facebook’s rules where it says that his network is just for liberals, or that he has a completely different set of standards for conservatives.

The latest tactic employed by the “Facebook police” is not to allow conservatives to share their comments with more than thirty of their friends or groups in a given period of time. But no one actually knows what that arbitrary period of time is. If you inadvertantly exceed this mysterious time limit then you will receive a Captcha “security check”, just one! But if you pass it and try to share something with just one more friend or in one more group then you will be prohibited from sharing anything at all for up to two days! TWO WHOLE DAYS! This single security check comes with a little warning. It says, “Slow down. You are using this feature in a way that it wasn’t meant to be used.” Oh really! I am?

I thought I was supposed to be able to connect with the people in my life! What is a sharing tool for if you can’t use it to share? “Misusing this feature”? Oh Really? I have been stymied from acquiring new friends for the past twelve months now. Every time I send out a few friend requests, I get another notice suspension and another notice from the Office of Community Standards prohibiting me from sending out any more friend requests for the next thirty days. I keep going from one suspension to another. One thing is for sure though. Facebook does make good on all their promises to punish people. That’s one thing that Facebook does very well, and it may be just about the only thing. They make good on all of their promises to punish their users!

So their latest strategy is to send out a single Captcha phrase with the following warning, “Slow down, you are posting too fast and you are misusing the sharing tool.” In other words slow down or else!  Well I found out what “or else” meant when I posted just one more time after being warned. I thought I would just get another Captcha Phrase. But instead I was completely banned for 24 hours the very next time that I tried to post. So how does that sound for being able to, “connect with the people in my life? Well, I have a word for those Captchas. I call them “Gotchas” and I call Facebook which keeps sending them to me… “Farcebook” because it is a joke for them to claim that they help you connect with the people in your life when in reality  they do just about everyting possible to keep you from connecting with the people in your life!

I am fed-up with Facebook! It is a rotten company started by an unscrupulous thief who is its founder and its CEO. He stole the idea for Facebook from his two Harvard classmates, the Winlklevoss twins and then he refused to pay them for their idea. Facebook was conceived in an act of theft and a definite pattern of stealing still continues within their organization until this day. You can see it as recently as last year when Facebook’s controversial plan to sell its user’s personal photographs through its subsidiary Instagram became publically known.

Up until recently Facebook has had no real competition and Facebook’s many conservative users have had no where else to go. So they have been forced to suffer Facebook’s anti conservative bias and discriminatory policies, i.e. all of the security checks, all of the timeouts, and all of the suspensions for sending out friend requests. Conservatives have been a doormat for Facebook for a long time. But now there are alternatives. Disgruntled Facebook users are beginning to coalesce around three different alternative social networks which have risen up out of the agony of political defeat in 2012. They provide an alternative to liberal owned Facebook. Conservatives don’t have to grin and bear it anymore, or stay put and complain. There are at least three different social network alternatives to Facebook. They are Freedom Torch, the Tea Party Community, and WePluribUS.

Freedom Torch has probably been around the longest. With about 17,000 members it is the oldest alternative to Facebook. Then there is the Tea Party Community Network which is less than 6 months old, but it already has over 100,000 members. And finally there is little WePluribUS. This is the newest and the best alternative in my opinion to come along and challenge the social networking giant. It is only about 8 weeks old and it already has 2,200 members. One of the best things about WePluribUS is that it promises to be entirely owned by its members in five short years if certain membership goals are met.

WePluribUS is not limited to conservatives by branding problems such as the Tea Party Community has to overcome in order to reach young liberals. In other words WePluribUS  has a better chance of reaching the next generation of young voters and changing their political orientation before they are brainwashed by the liberal media to be just like their fathers. WePluribUS does not run ads for the sole purpose of making money for its owners like both the Tea Party Community and Freedom Torch do. WePluribUS is dedicated to the greater goal of making the best argument for limited Constitutional government, and exercising personal responsibility. It offers the best hope for maintaining our own national sovereignty in the face of a growing tendency toward one world government. WePluribUS is soon going to be the best place on the internet to discuss news and politics for people of all political persuasions. I believe that if we can have a free exchange of ideas that the best ideas will prevail, and I am quite confident that those ideas will be conservative ideas in the end.