Why would I pay attention to them? The Benghazi hearings in Congress were just pure political theatrics. If this Congressional investigation into what happened at Benghazi really meant anything, then it would have produced its findings over six months ago, before the General Election of 2012 when it could have actually had an impact on those elections… not the Presidential Election of 2016. If this was actually a serious investigation into what went wrong at Benghazi then the Congressional Committee that held these hearings would have actually revealed the results of their investigation in enough time to affect the elections of 2012. There is nothing going in these hearings therefore that hasn’t already been decided upon in advance by Republicans and Democrats, and fully scripted for television. This is not the kind of an investigation that is actually going to uncover the truth, or get to the bottom of the dereliction of duty that occurred under President Obama, and Hillary Clinton’s watch.

Deciding to hold these hearings at this late date smacks of some kind of a political deal that was worked out in advance by Democrats and Republicans… a compromise that would postpone the onset of the hearings until after Barack Obama was re-elected in 2012 and all of his key appointments were in place. After that… then the Democrats agreed to let Republicans hold these hearings into what happened at Benghazi in order to try to make the most of these murders of our Embassy by trying to discredit President Obama’s legacy, and to diminish Secretary of State Hillary Clinton’s chances of winning the Democrat Presidential nomination in 2016.

In return for allowing Barack Obama to be re-elected, the Democrats conceded to allow Republicans an opportunity to try to discredit both President Obama, and Hillary Clinton’s record before the Presidential Election of 2016. It was a deal that was worked out well in advance, before these Congressional hearings were gaveled into order… Republicans allowed Barack Obama to win in 2012, and in exchange for that, the Democrats gave Republicans the next eight years in the White House beginning in 2016.

We already know the general gist of what occurred at Benghazi, and why the Obama Administration tried to cover it up. Hillary Clinton and Barack Obama failed to extend the much needed protection to our endangered American ambassador and to our Embassy personnel in Libya, and in spite of numerous requests for more security personnel they allowed them all to be brutally murdered by terrorists. Then they tried to blame it on an inconsequential You Tube Video about Muhammad that was made by a third rate, amateur film producer in California. 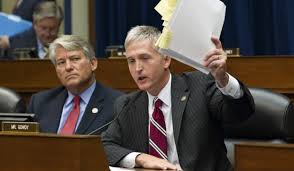 So why did Secretary of State Hillary Clinton and President Obama fail to come to our ambassador’s aid?  That is what should hopefully come out at these hearings, but don’t count on it. There is speculation that our Embassy was running guns to the rebels in Syria who are trying to overthrow the Assad regime and that President Obama did not want this information to come out in the final critical weeks before the November Elections. If I am correct, a deal has already been worked out to contain the current Congressional investigation into what happened at Benghazi. Otherwise I believe that House Speaker John Boehner would have already appointed a Special Prosecutor with broad subpoena powers to fully investigate the matter.

If you think it is worth watching these hearings on Benghazi and this political charade in Congress, then be my guest, but you are only watching the shadows on the wall. It is merely a distraction and there are far more important things to worry about going on in Congress right now under our noses, such as the Pathway to Citizenship Bill being promoted by the so called Gang of Eight.  I call it the “Pathway to Citizenshit Bull that is being forced upon us by the Gang of Rape!”  This is the greatest danger to our country right now, and it is flying totally under the radar because of things like the Benghazi hearings.

We all need to call our members of Congress and the House Republican leadership and tell them NO to any kind of a pathway to citizenship for illegal aliens… NO to any kind of an amnesty program… and NO to this kind of a “comprehensive immigration reform” Bill. The phone number for the Capitol switchboard where you can obtain the phone numbers for any member of Congress is: 1-202-224-3121.

If you liked this article then please subscribe to my free RSS Newsfeed from this website and join me and other patriots at www.wepluribus.net