America’s Thirty-Ninth President – Once a Dummy Always a Dummy ! 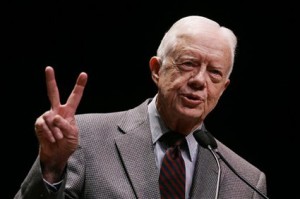 Once a Dummy – Always a Dummy !

Jimmy Carter was America’s thirty-ninth President. His name is pronounced “Jimma Cahduh.”  The emphasis is on the third syllable, but it should really be placed on the last syllable. President “Duh” served a single term between 1975 and 1979. Then he lost his bid for a second term to Ronald Reagan in 1980. He lost because of the  general perception that he was weak and ineffective in trying to win the release of sixty American hostages who were being held captive against there will at our American Embassy in Tehran.  After Iranian militants initially attacked our embassy on November 4th 1979 they occupied it and held Americans hostage there for 444 days, but within a few hours of Ronald Reagan’s inaugural address on January 1st, 1980 every single one of those hostages was on a plane heading back to America.

When the Iranians invaded our embassy in 1979 that was when the current cold war with Iran began. There have been times when the hostilities have been more than just cold and Americans have lost their lives. Iran’s proxies in the Middle East are Hezbollah and Hamas and with their financial support Hezbollah and Hamas are fighting and killing all over the Middle East.  Even the Huti rebels fighting in Yemen are Iranian proxies in its long standing war against American interests.

Now the big dummy who was our thirty-ninth President when the war with Iran actually began is at it once again. He has written a new book called “Reflections at Ninety” and in an interview for his book he spoke out in favor of President Obama’s nuclear weapons treaty with Iran.  In spite of his own personal experience with the regime he is still in favor of President Obama’s nuclear weapons treaty. The guy hasn’t learned a darn thing in over thirty six years. He is still just as naive as he was the day he left office. He still thinks the Iranians play by the same set of rules that we do. He still ascribes to the “Supreme Leader” his own set of Christian moral values. That was a recipe for disaster in 1979 and it is still a recipe for disaster today. He believes that our enemies who have sworn to destroy us can be trusted to keep their word. Now if that isn’t pathetic I don’t know what is. The only thing that the Iranians respect is force… force that stands up to and exceeds their own force. We have to meet their force with superior force. The Iranians are not intimidated by American weakness in the face of their aggression all over the world.

Today Jimmy Carter endorsed President Obama’s nuclear surrender treaty with Iran and he said he has total confidence that the Iranians will keep their end of the deal. If they give us their word they will keep it he said in an interview for his new book. Jimmy Carter has faith in the agreement negotiated by John Kerry. What can you say except once a dummy always a dummy? Maybe that should be the title of his new book.

If you enjoyed reading my article then please share it.