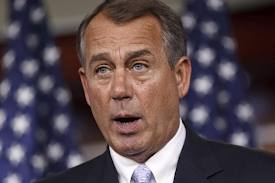 Boy oh boy has our country fallen from grace. The two most important documents in our Nation’s history, the Constitution and the Bible on which our country was founded, are barely even consulted anymore in Washington. When our Nation’s political leaders look for guidance they don’t turn to God or the Founding Fathers anymore. Instead they look to far less reliable sources of inspiration, like the United Nations, or the Council on Foreign Relations, or the World Bank! My oh my have we fallen from grace. Instead of seeking counsel in the great underlying principles of the Constitution, this week in Washington the Republican members of Congress scheduled a political conference at a D.C. area hotel to take each other’s temperature and check each other’s pulse. They got together in a sort of political huddle before they call their next play and make their next move.

After they determined that they were running a fever, and barely even possessed a heartbeat more less their own souls, they guzzled down a few more beers for courage, and then drunken with power their leader and quarterback John Boehner ordered the next play. It was an”end around run” right around the Constitution. There is one problem with that though. He isn’t receiving his instructions from the coach anymore because the Republicans have already agreed to toss our Nation’s political playbook, the Constitution and the Bible right out on their ears!

So they determined this week in Washington that they will raise the Federal Debt Ceiling once again, Republicans and Democrats alike, prefering immediate gratification instead of responsible government and exercising responsible measures to stop all of this madness! So there will be no dollar for dollar cuts in the Federal Budget as the Republicans had formerly insisted upon in return for increases in government revenues (more taxes) which at best was only a halfhearted solution to fix all of our Nation’s ills.

But now the “Repubicans” have decided to cave in to the Democrats demands and abandon their opposition to an increase in the Federal Debt Ceiling for the next three months… in order to keep all of those government entitlement checks coming… if Democrats will only agree to send them a balanced budget sometime soon and pass it in the next series of negotiations. Well, that’s the way the game is played in Washington.. That’s typical kick the can down the road Washington style politics. And don’t expect the Democrats in the White House or in the Senate to actually keep their word or agree to pass a balanced budget anytime in the near future!