The Mark of Pope Francis 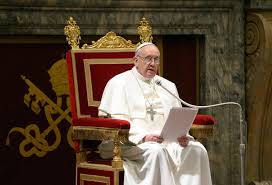 Pope Francis is definitely leaving his mark on the Catholic Church. Is he right on the mark, just a little short of the Biblical mark, or is this new Pope missing the mark completely and the whole point of the Christian Church? There is a sign along the road that reads, “Do you like Pope Francis? Come and see”. It is a billboard that is paid for by our local Catholic Church.  Well, I don’t need to come and see. I can see just fine where I am and I have already seen enough of this new Pope to believe that there is much more to this man than meets the eye . I have come to the conclusion that he is more than just a new Pope. He is the “New World Order Pope.” It is clear that his ultimate allegiance is not to Christ nor to the Holy Scriptures. Both his words and his deeds have contradicted the Bible on several different occasions already. He seems more like a secular humanist than a real Christian and the mainstream media just seems to love this guy. That fact alone should give us pause for concern because anytime the mainstream media likes someone or something you know that whatever it is or whoever it is just has to be progressive. That describes this new Pope perfectly. He is a progressive. That’s why the mainstream media loves him. 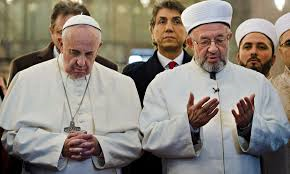 Pope Francis embraces the liberal church doctrine of social justice. He believes that the Catholic Church’s interfaith dialogue should include other religions, not just other Christian denominations. He thinks that such a religious coming together should include Islam, Hinduism, and Buddhism. Pope Francis doesn’t see anything wrong in praying together with Muslims. He even had the nerve to face Mecca recently during one of his interfaith prayer sessions with his Muslim prayer partner in Istanbul, Turkey. This was the noted Grand Mufti of the Blue Mosque.

Pope Francis believes that our words should not offend anyone and freedom of speech should never be used to criticize someone else’s religion. He also condoned physical violence as an acceptable response to what someone might consider to be offensive language or harsh criticism of their religion, and the Pope appears to understand if not actually sympathize with these blood thirsty Muslims who recently murdered innocent journalists at Charlie Hebdo in Paris.

Pope Francis said, “ If my friend speaks ill of my mother then he should expect to get punched. “   Does that sound like a statement that Jesus would make. Does that sound like the Pontiff is preaching the gospel of Christ? And what about those innocent French Jews who were murdered by Muslims for merely shopping at a kosher grocery store.  Does the Pope want us to believe that Muslims find that offensive too?  Maybe there shouldn’t be any kosher grocery stores in Paris.. Maybe there shouldn’t be any Jews in France in order to please the  Muslims in France. I know Muslims don’t want any Jews to live in the West Bank in the land that they want for a future Palestinian state. Is there anything that Pope Francis won’t say or do in order to appease these unwashed Muslims. Does it seem like Pope Francis is a reflection of Christ?  It sounds more to me like he is the perfect image of a modern secular humanist.

The last time that Pope Francis made international headlines he was in Turkey facing Mecca and praying together with the Grand Mufti of the Blue Mosque. The Bible says that we are to pray FOR unbelievers NOT WITH UNBELIEVERS. Apparently this Pope doesn’t know that.

Now the New World Order Pope is claiming that our freedom to speak should never be used to offend anyone, especially not to criticize someone else’s religion. I don’t remember Jesus being concerned about offending anyone. He criticized the false teachers and religious leaders of his day very well I think. Jesus preached openly in their temple and the apostles preached openly in their synagogues all over the Roman world speaking the truth without fear of the consequences or worrying about offending anyone. They also contended with Greek and Roman idol worshippers in some of those temples to the point that they were imprisoned for sharing the gospel.

Since Mohammed wasn’t even born yet at the time the apostles were alive there were obviously no Muslims in the world to evangelize, but if there had been I am sure that the apostles would have gone right into their Mosques and preached the Word of Truth openly with the anointing of the Holy Spirit. They wouldn’t have been worried about offending anyone.

Jesus told us to go into all the world and preach the gospel. He didn’t tell us to worry about what other people were going to think or to be concerned about offending unbelievers. Today you can’t even possess a Bible in the Middle East or practice your Christian faith openly because of compromises that have been made over the centuries by Muslim apologists like Pope Francis. If we don’t tell Muslims the truth about their religion then we are not doing our job as Christians and Jews. Pleasant forms of speech don’t need to be protected. It is the unpleasant forms of speech that need the protection of the law and in the West they have the protection of the law. Criticism and ridicule are acceptable forms of free speech in democratic societies and Muslims must learn to accept that if they are going to live here. They are living in our world. We are not living in theirs. If we remain silent in the face or their objections… if we are politically correct and refuse to criticize Islam out of fear of offending Muslims then we are telling the whole Muslim world that their violent behavior will yield the results they desire.  It is not the idea we should be conveying to them. Their violent behavior is unacceptable. Their religion is a pack of lies and that’s the truth whether they like to hear it or not !

If you liked this article then please let me know by clicking the LIKE Button below and sign up for my free RSS Newsfeed located at the top and bottom of the page.