Will There Ever be Any Real Winners and Losers in the Middle East ? 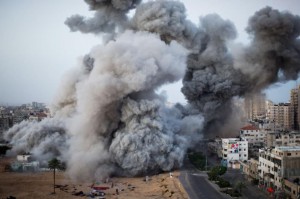 Is it the Right Time to Make Peace

between Israel and the Palestinians or

Only Lead to a Premature Peace and More War in the Middle East?

A Time for Every Purpose

“There is a time for every purpose under Heaven.” – Ecclesiastes  The great difficulty comes from not being able to tell what time it is.

In a liberal’s mind there shouldn’t be any winners or losers in life.  They believe that all conflicts should be resolved between opposing parties using internationally accepted standards of diplomacy without either side emerging as a clear winner or loser in their struggle. At least that is what they are always trying to accomplish in the Middle East between the Palestinians and the Israelis.

There is a time for every purpose under Heaven. I think it would be much better to just let them keep fighting until one side is ready to give up. Let them keep fighting until one side clearly emerges as victorious and the other side finally sues for peace. Let’s not be in such a big hurry this time to force the Palestinians and the Israelis to make another premature peace. Let them  fight it out this time until one side finally wins and the other side finally loses and they are ready to make peace. The word vanquished quickly comes to my mind. It is the only way to really end this ongoing conflict in the Middle East between the Jews of Israel and the Arabs in the West Bank and Gaza Strip. In fact it is the only way to end the controversy that has erupted over the return of the Jews to their rightful homeland. One side finally has to be allowed to win this war and the other side finally has to be allowed to lose and accept the terms of their surrender. This has to happen as painful as it may seem to some. The losers have to surrender.  There must be no more of these temporary cease fires that interrupt the conflict and allow the losing side to re-arm. They have to unconditionally give up their armed struggle against Israel once and for all. In order for that to happen Arabs must lose all hope of ever prevailing in their attempts to kill all the Jews of  Israel or send them back to Europe. Palestinians need to raise the white flag of surrender and agree to lay down their arms once and for all. They have to stop launching rockets into Israel and stop building underground tunnels across the border. They have to accept the terms of their surrender which will and rightfully should be dictated to them by Israel.

In order for there to be an actual end to the hostilities one side has to prevail in their armed struggle and the other side has to perceive that it is in their own best interest to give up.  That means that they have to lose all hope of ever prevailing against their enemy. It really isn’t any harder to understand than that. A temporary truce between two opposing sides that are still committed to winning the war doesn’t accomplish anything, but apparently our American Secretary of State doesn’t understand that and neither does the President he works for. That is why John Kerry is running all over the Middle East now trying to make peace between Hamas and Israel when they are obviously not ready to make peace. There is a time for every purpose under Heaven. There is a time for peace and there is a time to make war. The great difficulty comes from not knowing what time it is.

While I am on this subject of war and peace why don’t we also stop trying to make peace between the Sunnis and the Shiites. They are not ready to make peace. Let them continue to slaughter each other in the name of Allah until they are ready to bury their hatchets. There is a time for every purpose under Heaven. The great difficulty is in knowing what time it is.

If you liked this article please let me know by clicking the LIKE Button below. and sign up for my free RSS Newsfeed located at the top and bottom of the page