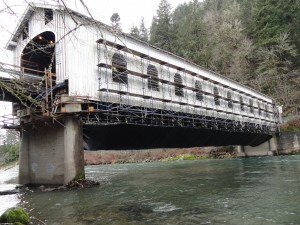 Goodpasture Bridge – After the Renovation.

Now that the repair work on the historic Goodpasture Covered Bridge is done, our Lane County Board of Commissioners should start considering how to best protect the bridge and the taxpayer’s investment in the newly renovated bridge.. However since they really didn’t spend much local taxpayer money, they enjoy the luxury of having a certain amount of insulation from the cause and effect of the deliberate heavy use of this bridge by commercial logging operations.

Personally I don’t want to see my historic covered bridge over the McKenzie River which is an official Oregon State treasure misused like it has been in the past by letting long lines of logging trucks loaded for bear, speed by my house on the way to crossing over this little wooden bridge with their 80,000 pound payloads of logs ready to go to the market. These heavy loads test the maximum allowable weight limit on the bridge about sixteen times a day. If our Board of Commissioners and Lane County allow them to do it, they will take advantage of any load limit that is placed on the bridge… I personally don’t want our historic wooden bridge to be used anymore for that type of constant heavy traffic. I think that only occasional heavy loads which are necessary for the residents who live up here should be allowed over the bridge in the future…

The reason for the Bridge Restoration Project was because civil engineers discovered a slight sagging in the middle of the Bridge..  Instead of being higher in the middle than it was on both ends as it should have been, it was actually about 4 inches lower in the middle of the span. That was not good, and it was getting worse so in addition to reducing the load limit on the bridge while  contemplating their options, and replacing the roof with new wooden shingles to make it lighter, our Lane County Board of Commissioners  decided on a two million dollar major renovation project to “tune up the bridge”.

What that means exactly is that they cut two sections out of the wooden plank floor on either side of the deck to accommodate two rows of temporary steel trusses that were assembled and bolted in place to cover the full span of 170 feet across the McKenzie River…  These steel trusses held the full weight of the roof while work was being done on the main floor beams so they could be straightened. Then they strung about half a dozen thick steel cables about one inch in diameter along both sides of the two outer floor beams. They were secured to the beams by steel plates which were bolted to the inside and outside of each beam with holes through which the steel cables passed. Then they tightened the cables with a pneumatic powered machine… That strengthened the wooden beams. Then the bridge itself was raised in the middle by tightening various vertical “hanger rods” which are positioned at precise intervals along the span. It was just like pulling the drawstring of a bow. When it was done  it was held in place by the vertical hanger rods and the steel re-enforcing cables. It put a positive arch back in the middle of the previously sagging wooden bridge.

The project was 90% paid for by a Federal Highway Grant and it cost about two-million dollars. The rest of the cost was picked up by Lane County taxpayers. They also installed some lighting on the bridge when they were done so it could be seen better at night… Don’t ask me why.  I am not sure if that was a very wise expenditure of public funds just to light the bridge at night, but it does look very pretty though. Someone obviously thinks there is plenty of government money to go around, right?

Now that they are all done the Lane County Commissioners have to decide what the new posted load limit on the bridge should be. It has been set at 10 tons for the past year in order to prevent from doing any further damage to the bridge… There is a County Commissioners meeting scheduled for sometime in the near future to discuss the weight limit. But there is already pressure being put on the County Commissioners to increase the maximum load limit back up to 40 tons, the way it was before the work began, so the logging companies can reap huge profits.

I am not against logging companies making plenty of money, but this is our historic covered bridge and we have a substantial amount of money invested in it. The logging companies who want to be free to ruin it don’t. As far as I am concerned …  if the logging companies want to haul multiple 80,000 pound loads of timber out of these mountains,  then they should build a new bridge meant to carry that weight, or they can erect a temporary bridge, alongside it or somewhere else for that matter, or they can haul their timber out of their using an alternate route over another bridge that is not made of wood… To my way of thinking it is just their cost of operating a logging company. They should not be allowed to begin the deterioration process that led to our bridge sagging in the first place by hauling unlimited 80,000 pound loads of logs across the bridge.

Weyerhaeuser is not a member of my little community… It is a big international corporation. They don’t live up here, and they don’t care about anything except maximizing their corporate profits. They don’t have to stand by and watch as their speeding logging trucks come barreling down our quiet country road with heavy loads of logs destined for market that prevent them from being able to stop if someone’s life depended on it… That’s because their drivers, and the many independent drivers they hire are driving those speeding logging trucks!

Weyerhaeuser and the other logging outfits who want to harvest their timber from these mountains should set up their own temporary bridge across the river somewhere else, or they should continue to haul their timber out of here using an alternate route back to town as they have been doing for the past year if they want to market their harvestable timber. It doesn’t take that much longer, and it should just be viewed as the cost of operating a successful logging operation up here… Our County Commissioner’s job is to protect the taxpayer’s investment in the recently renovated bridge, not to cave in to pressure from big logging companies, and it is not to see how much weight they can let these logging companies haul over the bridge during a short period of time before it starts to sag again.

Posting a legal load limit of 40 tons doesn’t really mean a damn thing… It’s how many times a day, week, or month during the course of a year those 80,000 pound truckloads of heavy logs are going across the Goodpasture Covered Bridge?  That’s what counts. If the County won’t stop the heavy loads of logs from going across the Goodpasture Bridge, then I want them to lay a weight sensitive cable across the southern approach to the bridge that would detect just how many times a week these heavy loads of logs weighing nearly 40 tons each are crossing the wooden bridge. If they won’t protect the bridge by setting a lower legal weight limit, then that is the least they can do.

The job of Lane County Commissioners is to protect the taxpayer’s investment in the Goodpasture Covered Bridge since it was taxpayer’s money that was used to fix. It was not Weyerhaeuser’s money that went to repair the bridge.  Yet it was certainly Weyerhaeuser that contributed the bulk of the heavy traffic that wrecked the bridge.  It is now up to the Lane County Commissioners to protect the taxpayer’s investment in the bridge so that we don’t ever have to repeat this massive renovation project again… Let’s see if their spines are at least as strong as the steel cables that were used to reinforce the bridge to keep it from sagging!

UPDATE:  On April 30th, 2013 the Lane County Board of Commissioners bowed to big ressure from big logging interests led by Weyerhaeuser, Rosboro Lumber Company, and Giustina Land and Timber Company and voted unanimously five to zero to post a new weight limit of 44 tons on the historic Goodpasture covered bridge. This comes hard on the heels of a multi-million dollar renovation of the wooden bridge financed by the Federal government that was caused by these same timber companies hauling their excessively heavy loads across the bridge in the past.  Let the degradation begin all over again.

For a link to the public testimony on the new weight limit please click here:   http://apps.lanecounty.org/WebCast/Play.aspx?mid=961

If you liked this story then please join me on our new social network at https://www.wepluribus.net 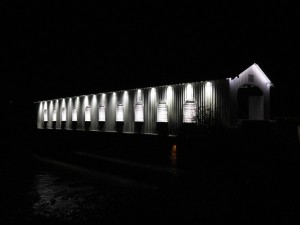 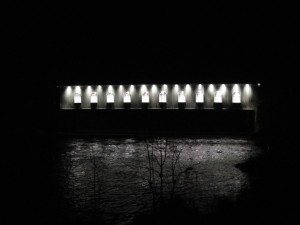