Will the World go to War over Kim Jong Un?

The man who wrote The Art of the Deal, our President, Donald J. Trump is making a very big deal right now about a very little dictator in North Korea. named Kim Jong Un. The reclusive leader of North Korea has been thrust into the national spotlight in a way that he has never been before. During the Presidential campaign Donald Trump promised to put America first, but ever since he took up residence at the White House he has turned his attention to faraway places and faraway countries in the Middle East and the South China Sea.  Instead of putting America first like he said he was going to do during the campaign, President Trump is putting other countries like Syria first, and dealing with the problem posed by North Korea first, way ahead of and far away from America… He has put both of these countries first, before addressing the problems right here in our own country.

Meanwhile back here in America the Trump Administration’s top priority seems to be addressing the Congressional hearings into fake allegations of Russian interference in our election, and the more real problem of President Obama’s abuse of Presidential  power in surveilling members of the Trump campaign staff and the Trump transition team. Not much else is actually getting done here at home to make America great again… and these Congressional investigations are doing nothing but wasting the taxpayer’s money.

President Trump has allowed his travel ban to be blocked by some low level district court judge instead of implementing the travel ban and telling the judge to pound sand while we all wait for the legality of the ban to be ultimately upheld by the United States Supreme Court.…  Why should the whole country wait for this security measure to be implemented until the question is decided by the United States Supreme Court? Does that make America safe again? Meanwhile another federal judge has just blocked the President’s most recent executive order to withhold federal funds from so called sanctuary cities. When did our country become a judicial tyranny? I don’t remember any federal district court judge anywhere in the country ever striking down anything that President Obama did.

The deal with Iran wasn’t blocked by a federal district court judge. ObamaCare is still the law of the land.  The effort to repeal and replace failed.  Then Trump threw General Flynn under the bus to appease the Democrats… Steve Bannon was removed from the National Security Council to appease the Democrats… and now another one of Donald Trump’s key senior advisors, Dr. Sebastian Gorka is being targeted for removal by the same hostile Democrat forces within the halls of Congress. They are merely campaigning for 2018. They also went after Kelly Ann Conway for the remark she made about buying Ivanka’s merchandise, and they even had the nerve to go after Ivanka Trump  for refusing to divest herself of her fashion clothing business. Of course they insist that the President should sell every single one of his business too.

This is all just a collaborative effort by liberal Democrats and Establishment Republicans along with the fakestream news media to prevent the Trump Administration from actually accomplishing anything in its first one hundred days. They especially want to undermine his desire to repair our relationship with Moscow which seems to be in ruins.  Have we all forgotten about Ronald Reagan and Mikhail Gorbachev?

America’s military industrial complex always needs to have at least one boogey man to go after.. During the Bush Administration it was Saddam Hussein and Osama Bin Laden… While Bin Laden was a real threat to our national security, Saddam Hussein was not. He was just a ruse that we had no business going after. The Obama Administration had Muammar Gadhafy in Libya, Hosni Mubarak in Egypt, and Bashar al Assad in Syria to go after. Now it appears that the newest boogey man on the block is Vladimir Putin, but regime change in Syria is still on the minds of many in Washington although he doesn’t threaten America at all… Then there is the little dictator in North Korea. What would we do without a boogey man or two or three ?

For many years we have been building up China to become a major industrial and economic superpower as well the regional military power they are in that part of the world. Now all of a sudden in the blink of an eye China has become a threat to our vital national security interests over some man made islands in the South China Sea. What they are doing there cannot be tolerated anymore… Why didn’t anybody bother to say anything for the last sixty years while we were empowering them by trading with them and purchasing all of their cheap manufactured goods? Now all of a sudden something has to be done about the growing threat posed by China. Excuse me, but I am not buying it. They are not a threat to America’s national security interests any more than Syria is. 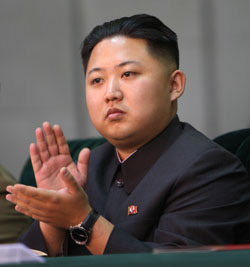 For years the Japanese and South Koreans have watched as a family of little dictators in North Korea have tried to develop their country’s military and nuclear capabilities, but no one ever thought that it rose to the level of an actual out and out military confrontation until now.. All of a sudden the current North Korean dictator poses such a great threat to the world and to America’s vital national security interests that it cannot be tolerated any more so we  sent a carrier strike group over there to the South China Sea to let him know it… Russian troops and Chinese troops are massing along the North Korean border in the event of a war and all one hundred United States Senators have been called to the White House in order to meet with the President about the situation… This is high stakes political drama at its worst.

The whole world is at loggerheads over more than just the little dictator in North Korea. Western democracies are in turmoil over how to handle the perplexing problems posed by unwanted Muslim refugees from the Middle East and North Africa. Many countries are so internally divided right now between people on the Right and on the Left of the political spectrum that they cant agree on anything anymore… The United States,  England,  France,  Germany,  Holland,  and Italy are all so internally divided that there is no hope for any national consensus, and yet  it seems like we are  on the edge of a world war. Are we really ready for a war with Russia and China over North Korea? Does something have to be done right now about the nuclear aspirations of the latest in the short line of little dictators from North Korea.  Is Kim Jong Un a reason for the world to go to war? I don’t think so.