How Many Presidential Debates will Americans Watch before Deciding Who to Vote for in 2016? 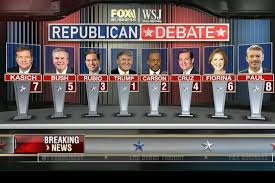 can the Networks Sell before Americans Start Losing Interest

and Begin Tuning Out and Turning Off?

To tune in or to tune out… that is the sixty four thousand dollar question.  Actually it is the $500,000 dollar question. Five hundred thousand dollars per minute is about what it cost to advertise during the Republican Presidential Debates. It’s a race for the White House, but it’s also a race for the money. Just how many of these prime time debates will Americans actually watch before we decide who to vote for in 2016?… and just how many of these gala media events will it take before we get so sick of  politics that we start to tune out and turn off our television sets?  I am already getting turned off by it all.

If you are not counting, this was the fourth in a series of twelve planned Presidential Debates broadcast live on prime time television and streamed over the internet all across America. The cost to advertise on one of these gala media events is about half a million dollars a minute. If you already know who you are going to vote for in 2016 then you probably don’t need to watch any more of these Presidential debates. They are just political fundraisers for the liberal media. They are being hosted by the major television networks and broadcast over the public airwaves in order to help them meet their annual budget and payroll expenses. I don’t want the liberal media to succeed in America… I want them to fail, but they keep getting bailed out every time we have an election in America. There are eight more of these Presidential debates scheduled for next year. Each one of them is expected to raise millions of dollars for their hosts. There will be one every month for the next eight months until the two major political parties select their respective nominees for the General Election in 2016. By then the networks will have garnered almost a billion dollars in advertising revenue from the Presidential Debates in order to fund their progressive propaganda machine. Elections have become a giant cash cow for the commercial television networks and the Presidential Debates are right behind the Super Bowl in terms of the amount of money they generate for the mainstream media.

The bottom line is this. What matters in politics as well as in broadcasting is always the bottom line. It doesn’t really matter what any of the Presidential candidates say or don’t say in the debates. It doesn’t matter how good they look or sound on camera under the klieg lights or how many times they keep repeating the same old statements over and over again about what they did as the Governor of this State or what they accomplished as a member of that particular Congressional committee. Governors Kasich, Bush, and Christie take note !!

Just about all of the Presidential candidates would say or do just about anything in order to win their Party’s nomination. The only thing that really matters is what they do after they are elected… and we won’t really know that until after they become President, but then it is too late. That’s when we will find out if we were actually sold a bill of goods or not. Candidates for political office always move to the left or right (depending on which Party they belong to) in the Primary Election, but they always move back to the center in the General Election just as if they never had a compass or any real positions on any of the issues. That is the standard procedure for sailing through rough political waters and it is the route that all professional politicians take. That is why we don’t need any more professional politicians in Washington D.C.

One thing I can say about the current race in the Republican Party is that neither Marco Rubio nor Ted Cruz are constitutionally eligible to be our next Commander in Chief. It doesn’t matter what they say or do in any of the debates because they are not eligible to be President under Article II  Section 1 of the Constitution which stipulates the requirements to be the President. One of these requirements is that the President is a “NATURAL BORN CITIZEN”. As far as Ted Cruz and Marco Rubio are concerned… neither one of them is. One of them was born in a foreign country to a citizen of yet another country, and the other candidate was born to two foreign citizens right here in our own country. While both of these young conservatives have since become American citizens as well as their parents nevertheless at the time of their birth that was not the case. The facts don’t disqualify them from being Senators or even Supreme Court Justices, but they do cast serious doubt upon their eligibility to be the next President of the United States.

If   Ted Cruz   or  Marco Rubio  were to become our next President, their election would serve to legitimize everything that the current President has done in the past eight years, and because I don’t want to see that happen I cannot support either Marco Rubio or Ted Cruz for President. Two wrongs don’t make a right. If Barack Obama was not eligible to be our President because his father was not an American citizen then the same thing holds true for Marco Rubio and Ted Cruz. It doesn’t matter whether you agree or disagree with their positions on the issues. You cannot apply a double standard. The United States Constitution didn’t matter to Democrats in 2008 and 2012, but it should matter to Republicans in 2016.

If our Nation is to remain safe and secure in a world that is becoming increasingly dangerous while at the same time it is becoming increasingly interconnected then we must insist upon the strictest possible understanding of what it means to be a Natural Born Citizen. We really don’t have a choice if we want to provide a decent future for our children and our grandchildren.

For everyone who wishes to believe that Barack Obama is a Muslim who was born in Kenya,  we don’t really know that for a fact,  but we do know that both his father and his grandfather were Muslims and they were born in Kenya . Therefore it doesn’t really matter whether Barack Obama was born in Nairobi or in Honolulu. Since his father was not an American citizen he is not eligible to be the 44th President of the United States. Everything that he has done in the last eight years has been completely illegal. It is as simple as that… By the same token we do know where Marco Rubio and Ted Cruz were born and we know to whom they were born. They are not hiding the fact and we must not repeat the same mistake that we did in 2008 and 2012 with Barack Hussein Obama.

We must codify into law the strictest possible definition of what it means to be a Natural Born Citizen. This means that in order to be the President of the United States you have to be born to two American parents and born on American soil. Nothing less than that will suffice to keep America safe. We must insist upon this definition before we really do wind up with an Islamist in the White House, and not just an Islamophile who circumvents the Constitution, bypasses Congress, and makes thousands of executive orders while he is in complete control of America’s foreign policy.

The controversy over what it means to be a Natural Born Citizen in Article II Section of the Constitution is as old as our country and it is time to put an end to this controversy. The problem is not Ted Cruz or Marco Rubio. It is not about their patriotism or their loyalty. It is not about their conservative credentials or their lack of conservative credentials. It is about establishing a dangerous precedent that will put our nation in serious jeopardy.

Did you know that Queen Noor of Jordan was born in Washington D.C. Her father was a Syrian immigrant and her mother was a Swedish American. She moved to the Middle East in the late 1970s and married King Hussein of Jordan where she bore him four children. By any limited understanding of what it means to be a Natural Born Citizen any one of her four Muslim children could become the President of the United States one day. Think about that for a minute

There are a lot of issues that are important in deciding the result of the next Presidential election. Illegal immigration, foreign policy, the Federal Debt, and campaign finance reform are all very important, but there is no issue that is more important than taking our country back from the political ruling class and the professional politicians that are ruining it. We must end the Establishment monopoly of our government. We must send the Establishment a strong message that they understand, and in order to do that we need to elect a complete Washington outsider to be our next President.

We don’t need any more professional politicians in Washington. We don’t need another Bush or another Clinton in the White House. We must not elect another President who is constitutionally ineligible to be our next Commander in Chief because that would just further establish the dangerous precedent set by Barack Obama, and we cannot afford to elect America’s first socialist President.  That is for sure. That leaves only four possible candidates to chose from. It is sometimes said that there are only two major political parties in America. One of them is the Republicans and the Democrats. That being said the four possible candidates for President in 2016 are… Rand Paul, Carly Fiorina, Ben Carson, and Donald Trump.  All of the others either don’t have a chance of wining or they aren’t worth a dime.

Donald Trump actually does have a chance of winning and he is worth a lot more than a dime. He doesn’t have to raise any money to finance his campaign so if he wins he won’t owe anybody a thing. I am supporting Donald Trump for President and I want my country back. I don’t need to hear any more debates. I know who I am going to vote for and it doesn’t matter if he isn’t the brightest bulb in the political landscape. He is always the most brilliant success on the stage wherever he goes and his record as a successful businessman and negotiator far outshines the Harvard debating skills and witty rhetoric of anyone else in the debate. The most important thing is not that the next President is the brightest bulb in Washington. He can hire people who are smarter than he is, but rather that the bulb always remains plugged into the right socket and he always remembers where he gets his power from… We the People.  Go Trump!