Can Government Eradicate Poverty? Bernie Thinks it can. 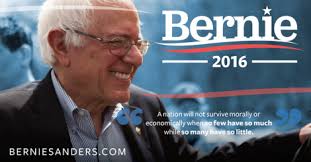 Bernie Sanders’ Campaign is based on a Fundamental Misperception that Government can Eradicate Poverty.

Bernie Sanders’ campaign appeals to hard core leftists?  We all know that the world isn’t a fair place, but can government eradicate poverty? Well Bernie Sanders  thinks it can and apparently he thinks it should, and all of the people who support him for President in 2016 apparently think that once he is elected President he will.

When you get right down to it, America’s progressive politicians are just like all Socialist and Communist politicians.  They don’t rob from the rich to give to the poor.. They confiscate other people’s wealth primarily to enrich themselves. They don’t really care about the poor whether you are talking about Mao Se Dung or Karl Marx,  or Barack Obama and Bernie Sanders. If you consider the accomplishments of socialism under Fidel Castro in Cuba or under Hugo Chavez in Venezuela you will see that creating parity of wealth isn’t all that its cracked up to be. The reality of socialism doesn’t measure up to all of the glowing hyperbole.. Marxists have always made grandiose promises to the poor that have never been fulfilled while they waxed bellicose about the disparity of wealth in the world.

Today Bernie Sanders is disparaging the disparity of wealth in America. I am not doubting his sincerity. He seems like an honest man, but I do seriously question his naiveté. Under Socialist leaders the poor have always become poorer and the disparity of wealth has always become greater. Curiously Socialist and Communist leaders have frequently been the chief beneficiaries of this growing disparity by joining the ranks of the Nuevo Riche!

Take Barack Obama for instance…  His populist demagoguery has earned him millions of dollars from admiring people who purchased his book to read about his plan for redistributing wealth. He will even make more money when his  two terms as President are over much like Bill Clinton did by traveling around the world to promote his socialist agenda. Yet when his life is over there will still be just as many poor people struggling to survive in America’s inner cities, living in cars, or under bridges, or on the streets.  The money he makes from the sale of his book do nothing to eradicate poverty.

In the end Barack Obama isn’t going to solve the problem of poverty in America and neither is Bernie Sanders. No political leader can reduce the amount of indigent people in the world.  Lyndon Johnson tried to do that, but after fifty years of his Great Society programs there are just as many Black people stuck in poverty  as there were in the 1960’s. That is because poverty isn’t cured by writing books or by passing laws or by making grandiose speeches. Poverty is solved by hard work and a determination to succeed by each and every individual who wants to make a better life for themselves and their families. The concept of determination and hard work is fundamentally at odds with Socialist ideology because hard work is based on a system of incentives. The harder one works the more money they receive for their labor, but there are no incentives in Socialism. Perseverance and determination get you nothing under Socialism. I don’t know if Bernie Sanders popular appeal is based on a sense of fairness or just on a fit of jealousy, but the United States government cannot eradicate poverty. Only individuals who are determined to succeed can eradicate poverty.

Barack Obama’s policies have created more poor people in America by providing them with a crippling sense of entitlement just like Lyndon Johnson’s policies did, and Bernie Sanders will only do more of the same. The Bible says that there will always be poor people in the world. It is not a problem that any government or world leader can fix.