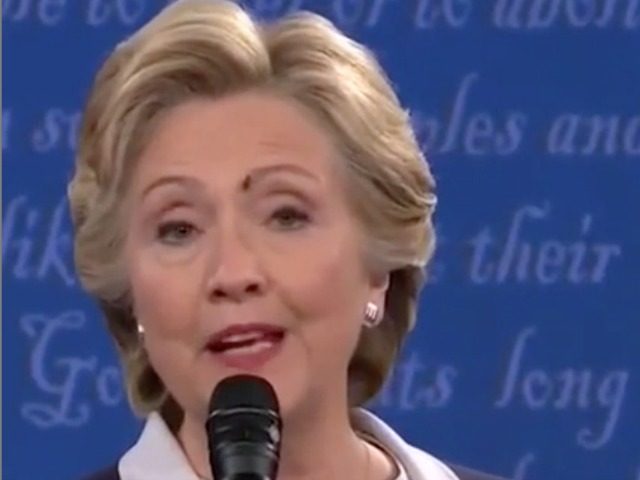 A fly always knows where the garbage is. That was proven once again Monday night in the 2nd Presidential Debate. At about 14 minutes and 40 seconds into what should have been billed as a media ambush of Donald Trump, not a substantive debate on the real issues facing our country… at just about the same time that Hillary Clinton began to open her mouth, a fly landed right on her eyebrow.. You can clearly see this in the  following video.

It is a perfect metaphor for the way that Hillary Clinton has been running her campaign of smears and character assassination against Donald Trump while at the very same time she has been dodging all of the important questions regarding her own unworthiness to be America’s 45th President. What did she do or not do at Benghazi?…  the lies she told to the American people about actions as Secretary of State… the fact that she had a private server in her own home and under her own control where she kept all of her official government emails… the fact that she deleted over 30,000 of those emails before handing the server over to the FBI for investigation. Did those emails contain the evidence of her influence peddling while she was Secretary of State?  Why else would Bill Clinton have received 750,000 dollars for a speech after Russia gained access to 20% of America’s domestic uranium?  He is not that good of a speaker is he?

You couldn’t come up with a better metaphor. A fly landed right on Hillary Clinton’s eye.  Are  Americans smart enough to recognize the message? Do we know where the garbage is like that fly does? According to some of the latest polls maybe we don’t.

All you hear about since NBC released that ten year old tape of Donald Trump bragging about his sexual exploits with women is the fallout over his decade old remarks. He is sinking in the polls and Republican politicians are distancing themselves from him. They are cooperating with the DNC to help elect this unscrupulous wife of an impeached former President. Both Bill and Hillary Clinton are guilty of obstruction of justice and both of them should be wearing orange jump suits, but even some Republicans who should know better are jumping ship and abandoning Donald Trump, like Mike Lee, Jason Chafetz and Mia Love.

How many times does Donald Trump have to apologize for those tasteless, decades old remarks about women, or point out that as bad as they sounded the reality is that they were just words.  It’s just locker room talk”, Trump said.. “I am not proud of those words, but they are just words. I regret them, but what Bill Clinton did to women was a lot worse than anything that I ever did.”

The mainstream media keeps beating this drum in order to put a couple of real jackasses back in the White House again. It’s time for Donald Trump to go on the attack. It’s time for him to bring out the “nuclear option”. He should expose Hillary Clinton for  allowing a Russian company (Rosatom) owned by the Kremlin to gain control of almost half of America’s domestic uranium supplies..  We could conceivably get nuked with our own uranium because of her poor judgment.  That of course is why the Obama Administration was in such a big hurry to sign that horrible nuclear arms deal with Iran…  Nothing else can explain it…

Russia is Iran’s major ally and it is in control of almost half of America’s uranium now thanks to Hillary Clinton.  As Secretary of State and a member of the Committee on Foreign Investments she gave her approval for the sale of American uranium assets to a Canadian company named Uranium One. She also signed off on the sale of Uranium One to a Russian company named Rosatom which is owned by the Kremlin.  That is precisely why the Obama Administration gutted the Treaty Clause and bypassed Congress in order to sign that nuclear arms deal with Iran. It is precisely why our relations with Russia are so strained right now. The deterioration of Russian American relations has nothing to do with Syria or even Ukraine really. The new cold war with Russia is the fallout over Hillary Clinton’s own greed and stupidity. That was the reason that Hillary Clinton had her own private email server… to cover up her treasonous acts. During the whole time she was Secretary of State the Clinton Foundation was receiving huge sums of money from foreign contributors for government favors, not for speeches Bill gave. Time and time again Hillary Clinton has proven that she does not have the common sense and good judgement to be our next President…